And Elohim spoke to Mosheh and said to him, “I am YaHuWaH. “And I appeared to Abraham, to Yitshaq, and to Yaaqob as Al Shaddai. And by My Name, YaHuWaH, was I not known to them?– Shemoth (Exodus) 6:2-3

The name of this Torah Portion is Wa’era ( va’era)  וָאֵרָא which translates “and I appeared”.  Elohim  declares to Mosheh אֲנִי יהוה “Ani YaHuWaH” or “I am YaHuWaH” וָאֵרָא “Wa’era” and I appeared to Abraham, Yitshaq and to Yaaqob! It is very important to understand the depth of what is happening here. יהוה (YaHuWaH) the infinite, self existing one appeared, but not just to anyone; to the forefathers Abraham, Yitshaq and Yaacob who personally saw him.  The manifestation of יהוה (YaHuWaH) is often called the Malakh (Messenger) YaHuWaH, Demuth (likeness) YaHuWaH, Debar (Word) YaHuWaH and the list goes on.  There are many titles which are attributed to the one true personal Name of יהוה YaHuWaH.  One has to understand that the glad tidings and revelation of Messiah is directly tied into the appearing of YaHuWaH to the forefathers!

Shemoth (Exodus) 6:3 “And I appeared to Abraham, to Yitshaq, and to Ya’aqob, as El Shaddai. And by My Name, YAHUWAH, was I not known to them?

This line in our Portion is often mistranslated.  For this reason many English versions seem to insinuate that YaHuWaH appeared as אֵל שַׁדָּי Al (El) Shaddai to the patriarchs and was not known  by the Name יהוה YaHuWaH.

“…but by my name JEHOVAH was I not known to them.”

Interestingly enough the KJV actually indicates a name here rather than “lord” or “god” which is normally used to cover up the Name יהוה YaHuWaH which should appear nearly 7,000 times in scripture. “JEHOVAH” is an attempt to transliterate the covenant Name using the improper vowel points. In the original 1611 KJV the Name appears as “Iehouah” instead of “Jehovah”.  The letter J is a very new addition to the English language and when it was originally used it made the Y sound.  Therefore the original KJV and Geneva versions used the name “Yehouah which is much closer than “Jehovah.”

This verse seems to say that the covenant Name YaHuWaH was not known to Abraham, Yitshaq and Yaacob. However, we know this cannot be true for even in the King James Version, Abraham called the name of Mount MoriYAH “JEHOVAH JIREH”, which is of course in inaccurate. In the Hebrew (Ibit) text we read יְהוָה יִרְאֶה YaHuWaH Yireh (Yirah). Therefore even Christians who are not familiar with Hebrew and do not have a translation with the proper Hebrew names, should know that Abraham definitely knew the covenant Name יְהוָה YaHuWaH.  Most of the English translations follow this same tradition and indicate the name of YaHuWaH was obviously known and used by Abraham according to the way they translated the name יְהוָה יִרְאֶה YaHuWaH Yireh.   However those same translations  imply in Shemoth (Exodus) chapter 6 verse 2 that Abraham and the patriarchs only knew the title אֵל שַׁדָּי Al (El) Shaddai,  and that the proper Name, יהוה YaHuWaH was not known by them!  Of course in the Hebrew we see that Abraham, Yitshaq and Yaacob exclusively called upon the Name of YaHuWaH many times throughout the text, but in corrupted translations of course people only see words like “lord”, “god” and sometimes “Jehovah” and “Jah”. Due to the fact that Hebrew lacks punctuation markers; such as periods, commas, question marks and exclamation marks context is always key!

This phrase should not be read as a statement but rather a question! “and by my Name YaHuWaH was I not known to them?” We know this from logical deduction, of course seeing that the context of the statement is in Torah and of course the entire beginning of Torah relates to us that Abraham, Yitshaq and Yaacob knew and used the Name. They would even name places as mentioned earlier (ie יְהוָה יִרְאֶה YaHuWaH Yireh) and some of their children (ie Yahuwdah) in honor of the Name YaHuWaH.  Reading and understanding Hebrew is an art! One must closely pay attention to details to understand what is being said and most importantly HOW it is being said.

So what does it mean to say that YaHuWaH appeared as אֵל שַׁדָּי Al Shaddai!  Well first of all the Torah literally reads “b’El Shaddai which literally means in El Shaddai, meaning in the role of El Shaddai. אֵל El (Al) is interpreted “the supreme” or “mighty one” and שַׁדָּי shaddai means “sufficiency”. YaHuWaH is the all sufficient, might power! However Al Shaddai is not the covenant Name but merely an expression of the position of YaHuWaH.  The term El (Al) is clearly not a name for in the TaNaKh the title is even used to describe heathen idols.  We are to understand that though idols are called El this is not to imply that they are in fact powers but rather that they are seen by their worshipers to have that status.

YaHuWaH instructed Mushah to make seven “I will” promises to the people of Yashar’al (Yisrael) on his behalf:

1 “אֲנִי יהוה “Ani YaHuWaH” (I am YaHuWaH), and I will bring you out from under the burdens of the Mitsrites (Egyptians), and

2 I will deliver you from their enslavements, and

3 I will redeem you with an outstretched arm and with great acts of judgment.

4 I will take you to be my people and

5 I will be your Aluahym, and you shall know that אֲנִי יהוה “Ani YaHuWaH” (I am YaHuWaH) your Aluahym, who has brought you out from under the burdens of the Mitsrites.

6 I will bring you into the land that I swore to give to Abraham, to Yitshaq, and to Yaacob; and

7 I will give it to you for a possession. אֲנִי יהוה “Ani YaHuWaH (I am YaHuWaH)!””

Notice these seven “I will” promises begin with  אֲנִי יהוה “Ani YaHuWaH ( I AM YAHUWAH) which is repeated in the middle and at the end!”

During a traditional Pesach meal four cups of wine are to be consumed. Each cup of wine correlates to this special seven fold promise!  These four cups are listed below.  Notice also that they correlate to the four letters of Yod, Heh, Waw, Heh יהוה. 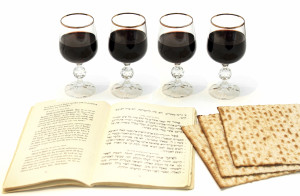 Sanctification – “I will bring you out , hotzeti: הוֹצֵאתִי, of Mitsrayim.”

Redemption – “I will redeem you, ga’alti: גָאַלְתִּי, with My power.”

Restoration – “I will take you, lakachti: לָקַחְתִּי, as My people  and I will be (וְהָיִיתִי) your Elohim.”

YaHuWaH said that he would harden Pharaoh’s heart so that he would not let the people go, in order to multiply his signs in the land of Mitsrayim. YaHuWaH commanded Mushah, who is 80 years old, and Aharon, who is 83 at this time, to perform a sign before Pharaoh.  Aharon threw his rod before Pharaoh and it became a serpent. It is interesting to note that Pharaoh’s magicians were able to do a similar trick, however Aharon’s serpent swallowed theirs. Though this should have been a warning to the prideful Pharaoh, he would not listen. YaHuWaH sent Mushah and Aharon the following morning to meet Pharaoh by the Nile River where they were to speak yet again saying “YaHuWaH Aluahym of the Abrym (Ibrim/Hebrews) has commanded, Let my people go!”

Thus said YaHuWaH, “By this you know that I am YaHuWaH. See, I am striking the waters which are in the river with the rod that is in my hand, and they shall be turned to blood, and the fish in the river shall die. And the river shall stink, and the Mitsrites shall find it impossible to drink the water of the river.” Shemoth (Exodus) 7:17-18 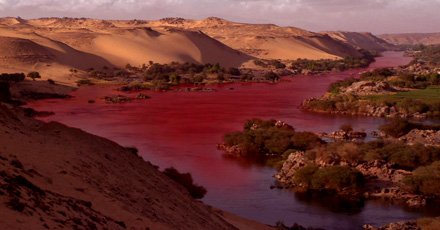 YaHuWaH commanded that they strike the water with the rod that was turned into a serpent.  When they did strike the river all the water in Mitsrayim whether in the Nile River, ponds or vessels of water contained blood. Again the magicians of Pharaoh were able to do a similar trick, so therefore Pharaoh’s heart was hardened. The blood lasted for the span of seven days.

The second plague were innumerable frogs. The magicians were able to replicate this sign as well however after some time Pharaoh called Mushah and Aharon to get rid of the frogs claiming he would let the people go, but he did not keep his word. The third plague were gnats that covered the land of Mitsrayim. This plague worried the Magicians because they were unable to duplicate it and said to Pharaoh that it was the finger of Aluahym (Elohim). 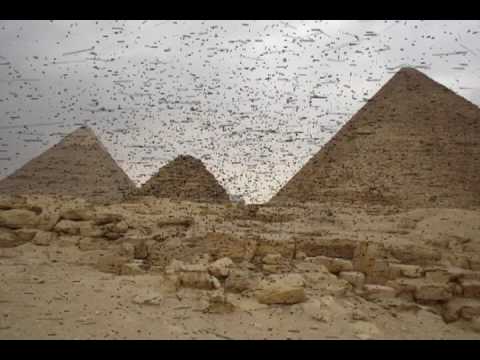 From that moment on the Magicians were unable to perform any of the signs that Mushah and Aharon did. The next plague was biting flies that covered man and beast throughout the land. With this plague YaHuWaH separated the land of Goshen and his people so that no flies were in the land of Goshen. This plague makes Pharaoh urge Mushah and Aharon to go and slaughter to YaHuWaH and he even tells Mushah to pray for him. However Pharaoh was again being deceitful and did not allow them to go. Due to this, YaHuWaH plagued the cattle of the Mitsrites with pestilence so that they died but not one single beast of the Yashar’alites (Israelites) who dwelt in Goshen were harmed. 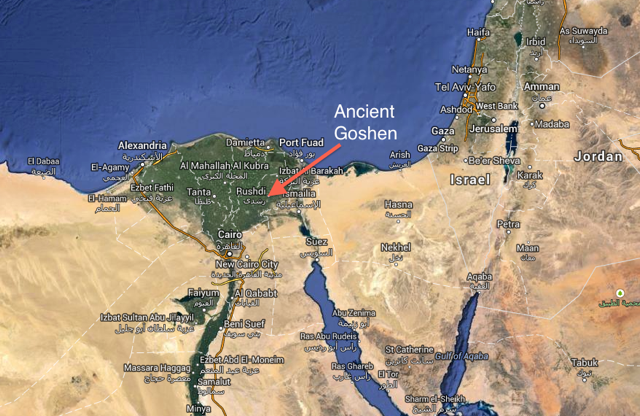 YaHuWaH commanded Mushah to say to Pharaoh “for this reason I have raised you up, in order to show you My power, and in order to declare My Name in all the earth!” YaHuWaH raised up Pharaoh to destroy him and thus make the Name of YaHuWaH known to all the empires of the earth.

The next plague, which is the last one for this Torah Portion, was a fiery hail. The scriptures tell us that the hail destroyed the crops of the Mitsrites but the land of Goshen was again left unharmed.

This portion of Torah covers seven of the ten Plagues (Makat) that took place in the land of Mitsrayim.

YaHuWaH makes a separation and distinction between his people and the Mitsrites. If we are the people of the Most High we will be protected when the empires of this world come crumbling down. The destruction we are witnessing in the land of Mitsrayim is a picture of the future destruction of Babylon, or the world system. YaHuWaH is raising up the beast system and it’s little horn power, also known as anti-messiah so that he can destroy them for the sake of his great and mighty Name!  The Name of YaHuWaH will be made known to the entire earth!