“And it came to be, at the end of two years’ time, that Pharaoh had a dream, and saw him standing by the river…”-Beresheeth (Genesis 41:1)

Pharoah immediately orders that Yahuwseph appear before him.  Pharaoh then relates the two great dreams to Yahuwseph. In the first dream, seven ugly lean cows devoured seven beautiful, fat cows. The second dream was similar, seven thin ears of grain swallowed seven fat ears of grain. Yahuwseph is given the interpretation from YaHuWaH that the two dreams are one and that seven years of plenty are coming followed by seven years of famine. Yahuwseph advises Pharoah that a wise man should be chosen to oversee the project of storing grain for the next seven years in preparation for the famine that would soon come. 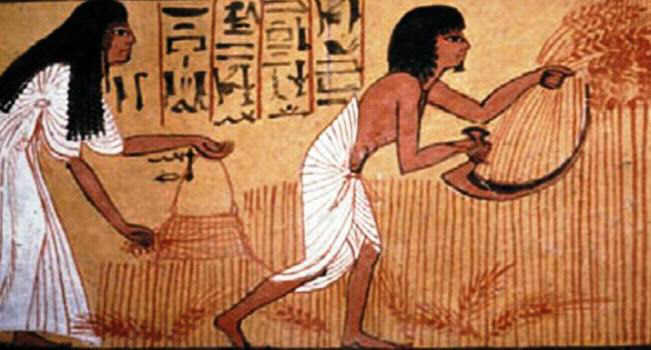 Beresheeth (Genesis) 41:38 And Pharaoh said to his servants, “Could we find another like him, a man in whom is the Spirit of Elohim?”

Pharoah, a heathen king, discerned that Yahuwseph was filled with רוּחַ אֱלֹהִים ,Ruwach Elohim, which is the spirit and breath of Elohim! Pharoah sets Yahuwseph over the project of storing grain during the years of plenty and of distribution during the years of famine.  He proceeds to make Yahuwseph his right hand man giving him power over all his subjects and making him second in command directly under Pharaoh himself. He also dressed Yahuwseph in royal robes and bestowed upon him the royal signet ring, and placed him on the viceroy’s chariot. Pharoah “renames” Yahuwseph,  צָֽפְנַת פַּעְנֵחַ “Tsofnat Paneach” meaning “Decipherer of Secrets”.

Yahuwseph is also given the daughter of a Mitsirite (Egyptian) priest named Asenath as his wife.   Together they have two sons, מְנַשֶּׁה Manasseh, meaning “Forgetting” and אֶפְרָיִם Ephraim interpreted “Fruitfulness”. These two sons would be named as two of the twelve tribes of Yisrael (Yashar’al). They are often called “half tribes” and are a picture of the grafting in of the gentile nations who come to belief in YaHuWaH.  The northern ten tribes of Yisrael (Israel) are often called by the name אֶפְרָיִם Ephraim in the TaNaKh. The house of Ephraim or Yisrael would much later be exiled into Assyria thereby they are referred to as “the lost tribes” since they assimilated into the heathen nations.  The Northern “lost tribes” have not returned to the land to the Promised Land until present day. They, however, will return as has been spoken by the prophets. 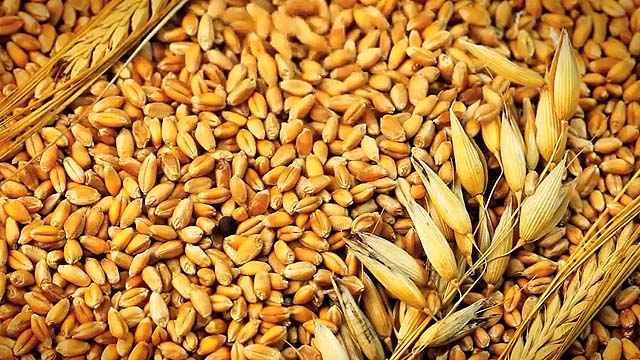 For seven years, Yahuwseph accumulated an abundance of food. As he had interpreted, the seven years of famine arose. Yahuwseph opened the storehouses and sold food to the Mitzarites (Egyptians). Mitzraim was a major super power, offering protection and food to neighboring lands. This made them subject to the great famine as well, and their inhabitants came to Mitzraim (Egypt) to obtain food. 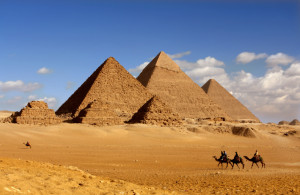 Due to the famine, which spread even to the land of Kena’an, Ya’acob sent all of his sons, except BenYamin, to purchase food in Mitzraim (Egypt).Ya’acob’s sons came and bowed themselves before Yahuwseph “with their faces to the ground” because he was governor of the land and in charge of the food distribution.  Yahuwseph immediately recognized them, but they could not identify him. Yahuwseph accused them of being spies and imprisoned them for three days. He released all his brothers except Simeon until they would return with BenYamin to verify their story.

The brothers spoke in Hebrew עִבְרִי (Abryt/Ibrit) about Yahuwseph and attributed their troubles in Mitzraim to what they did to him. Yahuwseph understood עִבְרִי Hebrew of course and saw their repentance or teshubah, which caused him to exit the room to weep.

He secretly instructed his servants to return their money and hide it inside their sacks of grain. The brothers discovered the money much later and feared that they would be accused of being thieves. Arriving home, they informed their father Yaacob of all these events.  However, Yaacob refused to let BenYamin go to Mitzraim at first. Due to persuasion from Yahuwdah, eventually Yaacob relented and allowed BenYamin to go to Mitzraim (Egypyt).

When the brothers arrived in Mitzraim they were directed to Yahuwseph’s personal residence. The brothers presented a gift from their father and again bowed down before him, confirming Yahuwseph’s dreams a second time. Yahuwseph hosted a great feast and arranged the brothers to sit in order of their birth. He served BenYamin, his youngest brother and only brother through Rachel, five times the amount of food than his other brothers!

Yahuwseph ordered his servants to, once again return the money for grain, in their sacks and to further place Yahuwseph’s silver goblet in BenYamin’s sack.  After the brothers left for Kena’an (Canaan), Yahuwseph’s steward overtook them and accused them of stealing the goblet. The silver goblet was then discovered in BenYamin’s grain sack. The brothers rent their clothes in grief and returned to Yahuwseph, where they once again fell to the ground before him. Yahuwdah offered himself and his brothers to be slaves in BenYamin’s stead, but Yahuwseph refused and stated that only BenYamin would be made a slave for the crime of theft.  Thus the Torah Portion concludes with Yahuwseph testing the loyalty of his brothers. 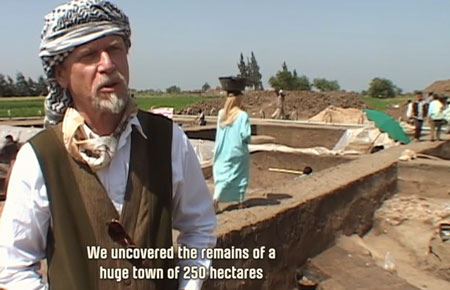 Recent archaeological digs in the ancient land of Goshen have shown a massive settlement of Hebrews in the region.  Within this find is a large palace dedicated to a Shemite ruler.  The palace is built in the ancient Kena’anite design with twelve columns and twelve graves in the back quarters.  The grave of the ruler of the palace was very large and designed within a pyramid which was permitted only for royalty.  The evidence points to this   ruler being Yahuwseph!

Artistic recreation of the palace found in Goshen.  This is very likely the palace of Yahuwseph!

A portion of the destroyed statue found in Pyramid Tomb in Goshen.  The bones are missing.

Yahuwseph was a man of YaHuWaH!  He is a picture of the higher calling in the רוּחַ ruwach (spirit).   Even Pharoah recognized that the רוּחַ אֱלֹהִים Ruwach of Elohim was inside of him. He was modest, wise, humble, strong and resilient to say the least. Yahuwseph knew the importance of dreams and their interpretations; he had a direct connection to the Elohim of his Father. YaHuWaH was with him through all of his trials and ultimately elevated him over the entire nation of Mitsraim (Egypt) and even over his own brothers! When YaHuWaH is with us, who can be against us?

Yahuwseph is a picture of the Messiah, Yahuwshuwa! Both were beloved of their Father and hated by their brothers. Just as Yahuwseph’s brothers did not recognize him, Yahuwshuwa’s people at large did not recognize or accept him. Just as Yahuwseph appeared to be an “Egyptian” and had a foreign name, Yahuwshuwa today is not recognized by Israel because he is displayed as a gentile Greek with the erroneous Greek name “Iesus”. However, just as the tribes of  Yisrael (Yasher’Al) bowed before Yahuwseph so they shall bow before the Sovereign Mashyach Yahuwshuwa who will reveal himself to his people!