Hebrew Word/Phrase of the Week: Vayigash

This week’s Torah Portion is called Vayigash (ויגש), and it means “came near”. In the first sentence of this portion, it says, “And Yahudah came near (Vayigash) to him..”. Yahudah begs to take the place of BenYammin (Benjamin/Binyamin) as a slave in Egypt (Mitsrayim) and Yahuseph (Joseph) reveals himself to his brothers. In the end of this portion, his family comes to live with him and Yahuseph is reunited with his father.

Chapter 44 (cont.): Yahudah pleads for his brother BenYammin and begs Yahuseph to take him instead. 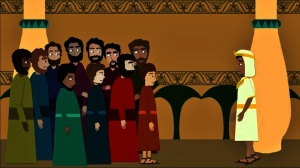 Chapter 45: Overflowed with emotions, Yahuseph tells everyone to leave so that he and his brothers are left alone. Then, Yahuseph cries a loud cry that all the Mitsrites and house of Pharaoh hear. Yahuseph confesses that he is their brother, and asks if his father is still alive. The brothers trembled before Yahuseph, but he comforts them with his words and sends them to bring his father and come live with him in Mitsrayim. When Pharaoh heard that Yahuseph’s brothers had visited him, he was pleased and gave Yahuseph wagons and food for his brothers’ journey, and offered the best of the land.

When the brothers return home, they tell Yashra’el (Ya’acob) about Yahuseph and he doesn’t believe them until they tell him all the words Yahuseph had spoken to them, and he sees the wagons outside. Yashra’el is revived and says, “Enough!” He is going to see his son before he dies.

Chapter 46: Now Yashra’el sets out with all his belongings and his family, and stops in Be’ersheba and offers offerings to YHWH. Elohim speaks to Yashar’el in the visions of the night and tells him not to be afraid to go to Mitsrayim, and that there he will make him a great nation. Yahuseph rides out on his chariot to meet his father in Goshen and cries on his neck for a long time when he sees him.

Fun Fact: Ya’acob and his family together are exactly 70 people. That’s a big family!

Chapter 47: Yahuseph takes 5 of his brothers and his father Yashra’el to meet the Pharaoh and Yashra’el barak (blesses) Pharaoh. When Pharaoh, meets Yahuseph’s father Yashra’el, the first thing he asks is how old he is!

Fun Fact: During Yahuseph’s time in ancient Egypt, resources say the average life span of an Egyptian was 40-50 years. Yashra’el being much, much older than that was 130 at that time.

His family is given the best of the land and they all lived there. The famine continues on for the time appointed but his family still has possesions and increased exceedingly.