Hebrew Word/Phrase of the Week: Beha’alotcha

Meaning: ”When you ascend”

The Torah Portion this week is called Beha’alot’cha (בהעלותך), meaning “When you ascend.” This time we learn about the what’s going on after the first year of being in the Wilderness and how things are so quickly turning sour.


Chapter 8:  YHWH tells Moshe how the lampstand for the Mishkan (Dwelling Place) should be set, and that it should be a beaten work of gold. The lampstand would also be decorated with blossoms and would look just like the pattern YHWH showed Moshe. Then Moshe is told how to prepare the Lewites before they begin their service, and what age range they should be when in active service to the Mishkan.

Fun Fact: Lewites 50 years old got to retire from their active service. They could still attend with their brothers while they guarded their duties, but didn’t have to do any services.

Chapter 9: Now the children of Yashra’el had been in the Wilderness for a year at the time, and YHWH tells Moshe how they are to perform the Pesach (Passover) memorial. And according to everything YHWH said, so the children of Yashra’el did. But as this was the people’s first Pesach since being in the Wilderness, situations arose that the people had questions as to what to do. For example, there were men who were defiled because of someone who had passed away and were not able to do the Passover that day. So instead of having to wait until the next year to participate, they brought their case to Moshe, who asked YHWH what they should do. In short, YHWH said that if there were any males who are unclean for a being, or are far away on a journey, they would have another opportunity to participate at the exact same time the next month, everything else being the same according to the laws of the Pesach (Passover).

Chapter 10: Then YHWH instructs Moshe to make two silver trumpets, made of beaten work. These were to be used for several things, such as calling the people, breaking up the camp and war. All had different signals for the people by making the different sounds, according to the occasion. And when the trumpets were to be blown in war or during the feasts, YHWH would remember the children of Yashra’el. And after Pesach (and about a month later), the cloud moves from the Mishkan (Dwelling Place), and the people depart in order.

Fun Fact: YHWH’s ark travels 3 days’ journey ahead, to seek a resting place for them.

Chapter 11: After a while, the people were complainers, and it was evil to YHWH. He was angry and consumed those who were outside the camp. Many people could only think about how they ate fish and cucumbers and melons and leeks and garlic while they were in Mitsrayim and complained because they had “nothing to look at but this manna!”.

Fun Fact: The manna looked like coriander seed, which is tiny and not like most picture it- as small tortillas of bread ready to eat on the ground. The people gathered it, ground it on millstones and cooked it in a pot or made cakes (bread) out of it.

They questioned why they even left Mitsrayim and cried. All this worried Moshe. He thought, ‘where is there going to be enough meat for all the people?’, and was overwhelmed by all the burdens. YHWH advises Moshe to bring 70 elders to him and he would set-them apart to help him bear the burdens of the people, so he didn’t do it alone.

But YHWH was very mad at the people for their grumblings. Yet as angry as YHWH was at the people for this, YHWH listened to Moshe’s prayer for the people and tells Moshe that he will give the people meat until it comes out of their nostrils and they get sick of it, because they rejected him by choosing Mitsrayim instead. And a wind went forth from YHWH and brought quail to fall beside the camp. They were everywhere around the camp and the people gathered all that day, all that night, and all the next day. And while the meat was still in their teeth, before it was swallowed, YHWH’s wrath burned against the people with a great plague. The plague consumed the people who had lusted for meat. 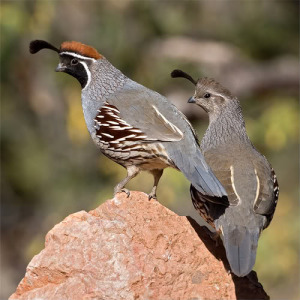 Fun Fact: Quails are vegetarian and are native to North America, though that’s not the only place. These little guys are ground dwellers and prefer bushy areas and open spaces. They lay very bright colored eggs.


Chapter 12: Now the people are getting ready to set-out again and Miryam and Aharon speak against Moshe, because he had married a Kushite woman. And YHWH heard it and was upset for Moshe’s sake because he was the most humble man of all who were on the face of the earth. So YHWH calls for them to meet him at the Tent of Meeting, and he tells Aharon and Miryam that, and of how Moshe is trustworthy in all his house, and how he speaks to him face to face only. YHWH’s displeasure burns against Miryam and Aharon, and he left. But when the cloud turned away from above the tent, Miryam was leprous! And Aharon begs Moshe not to let Miryam be like this and Moshe cries to YHWH to heal her. YHWH then explains that his punishment for her is to be shut out of the camp for seven days, and the people didn’t set-out until Miryam was readmitted back into the camp.