And YaHuWaH spoke to Mosheh, saying, “Take a count also of the sons of Gereshon, by their fathers’ house, by their clans.– Bamidbar (Numbers) 4:21-22

The Torah Portion נשא “Naso” begins with YaHuWaH giving instruction to Mushah (Moses) to “naso et rosh” which actually means “lift up the head”, but is interpreted to take a count.  נשא Naso therefore means to “lift up.” Mosheh (Mushah) is told to take a count of the Lewites of the clan of Gershon. It was the Gershonites who were in charge of the important task of carrying the curtains, coverings and tapestries for the Mishkan (dwelling place). Gershon was one of three sons of Lewi; Gershon, Qohath and Merari.

In the preceding portion all Lewite males from one month old and up were counted. In נשא Naso a second count is taken, of the three clans of Lewites who transport the Mishkan. The count must be of Lewite men between the ages of thirty and fifty. 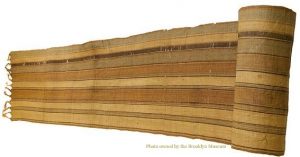 The Qehathites were commanded to carry the Qodesh “vessels.” This included “the ark, the table, the menorah, the altars and the Qodesh vessels with which the service is performed; and the [inner] screen and all its implements.” 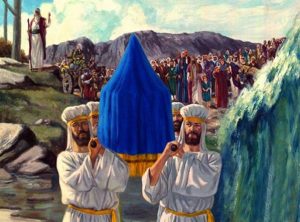 “And under the custody and charge of the sons of Merari shall be the wall-panels of the Tabernacle, its bars, its pillars, its foundation sockets, and all their implements and all that belongs to them. And the pillars of the court round about, and their sockets, pegs and cords.”

After “lifting up the head” or counting the three distinct Lewite clans who transport the Mishkan YaHuWaH gives new instructions. He commands that all who have tzaraat (“leprosy”), a discharge of the flesh and those who have been in contact with a corpse should remain outside the camp until they capable of being cleansed.

A woman who is suspected of adultery is called a sotah. The Torah commands to prove her guilt or innocence with “bitter waters”:

The following oath is then quoted to the sotah:

Bamidbar (Numbers) 5:19‘And the priest shall make her swear, and say to the woman, “If no man has lain with you, and if you have not turned aside to uncleanness under your husband’s authority, be free from this bitter water that brings a curse.20“But if you have turned aside under your husband’s authority, and if you have defiled yourself and some man other than your husband has lain with you” –21then the priest shall make the woman swear with the oath of the curse, and he shall say to the woman – “YaHuWaH make you a curse and an oath among your people, when YaHuWaH makes your thigh waste away and your belly swell,22and this water that causes the curse shall go into your inward parts, and make your belly swell and your thigh waste away.” And the woman shall say, “Amen, amen.”23 ‘And the priest shall write these curses in a book, and shall wipe them off into the bitter water,24and shall make the woman drink the bitter water that brings the curse, and the water that brings the curse shall enter her to become bitter.

The oath is inscribed in a parchment scroll, and the scroll is placed in the “bitter waters” until the writing is faded indicating that the letters of the curse are now in the water. The woman is then given the water to drink. 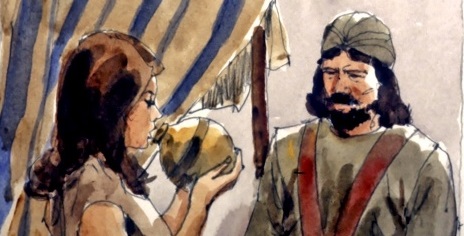 Bamidbar (Numbers) 5:27‘And when he has made her drink the water, then it shall be, if she has defiled herself and has committed a trespass against her husband, that the water that brings the curse shall enter her and become bitter, and her belly shall swell, and her thigh shall waste away, and the woman shall become a curse among her people.28 ‘But if the woman has not defiled herself, and is clean, then she shall be clear and shall conceive children.

A nazir is a man or woman who decides to become qodesh to YaHuWaH by taking a vow of nezirut.  This generally means they are forbidden to drink wine, cut his or her hair, or to become tamei (unclean) through contact with a dead body, even for a close relative. The word Nazir literally means “an untrimmed vine” such as what would happen on the Shabbath and Yobel (Jubilee) years. In many ways a Nazir is a picture and foreshadowing of these special years which ultimately points to the coming reign of YaHuWaH on earth. 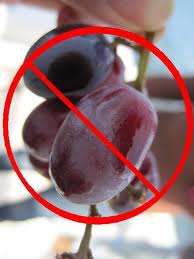 At the end of the period the vowel of nezirut, the nazir brings a succession of offerings. He is to bring a male lamb as an “ascending offering,” an ewe lamb as a “sin offering” and a ram as a “shalom offering” The nazir’s hair is now shaved and burnt in the fire below the shalom offering. We know such men as Shemu’el (Samuel), Shimshon (Sampson) and Yahuchanon (John) the immerser were all set apart to be Nazarites for the entire length of their life.

Bamidbar (Numbers) 6:23 “Speak to Aharon and his sons, saying, ‘This is how you barak the children of Yisrael. Say to them:24 “YaHuWaH barak you and guard you;25YaHuWaH make His face shine upon you, and show favour to you;26 YaHUWaH lift up His face upon you, and give you shalom.” ’ 27“Thus they shall put My Name on the children of Yashar’al, and I Myself shall barak them.”

The concept of YaHuWaH sealing us with his Name is very profound throughout scripture. This short berikah (“blessing”) could provide ample information in Hebrew and English to create quite a lengthy study. The most important part of this berikah though is the result of having the Name of YaHuWaH placed on his people.

Bamidbar (Numbers) 7:And it came to be, when Mosheh finished setting up the Dwelling Place, that he anointed it and set it apart and all its furnishings, as well as the altar and all its utensils. Thus he anointed them and set them apart. 2And the leaders of Yashar’al, heads of their fathers’ houses who were the leaders of the tribes and over the ones registered, drew near,3and they brought their offering before YaHuWaH: six covered wagons and twelve cat-le, a wagon for every two of the leaders, and for each one a bull. And they brought them near before the Dwelling Place.

YaHuWaH instructs Mosheh that the wagons and oxen should be used by the Lewites to transport the Mishkan.

Two wagons and four oxen were given to the Gershonites, to help carry the Mishkan’s tent coverings and tapestries. Four wagons and eight oxen were given to the clan of Merari, who carry the wall panels, foundation sockets, posts and other such items. “But to the sons of Qohath he gave none, because the service of the most qodesh belonged to them: they bore on their shoulders.” 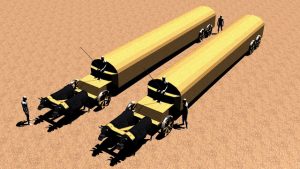 One Nasi (prince) was to bring his dedication to the altar each day for twelve days.

Bamidbar (Numbers) 7:11 And YaHuWaH said to Mushah, “Let them bring their offering, one leader each day, for the dedication of the altar.”12And the one who brought his offering on the first day was Nahshon, son of Amminadab, from the tribe of Yahudah.13And his offering was one silver dish, the weight of which was one hundred and thirty sheqels, one silver bowl of seventy sheqels, according to the sheqel of the set- apart place, both of them filled with fine flour mixed with oil as a grain offering;14 one gold ladle of ten sheqels, filled with incense;15one young bull, one ram, one male lamb a year old, as a burnt offering;16 one male goat as a sin offering;17 and as a peace offering: two cattle, five rams, five male goats, five male lambs a year old. This was the offering of Nahshon, son of Amminadab

The next day the same gift is brought, by Nethanel the son of Zuar, prince of the tribe of Yissakar and so on and so forth for twelve days.

After listing the twelve tribes’ offerings on the first twelve days of the month of Abib, the Torah summarizes:

Bamidbar (Numbers) 7:84This was the dedication of the altar from the leaders of Yashar’al, when it was anointed: twelve silver dishes, twelve silver bowls, twelve gold ladles.85Each silver dish was one hundred and thirty sheqels and each bowl seventy sheqels. All the silver of the vessels was two thousand four hundred sheqels, according to the sheqel of the set-apart place.86The twelve gold ladles filled with incense was ten sheqels each, according to the sheqel of the set-apart place. All the gold of the ladles was one hundred and twenty sheqels.87All the cattle for the burnt offering were twelve young bulls, the rams twelve, the male lambs a year old twelve, with their grain offering, and the male goats as a sin offering twelve.88And all the cattle for the peace offerings were twenty-four bulls, the rams sixty, the male goats sixty, the lambs a year old sixty. This was the dedication of the altar after it was anointed.89And when Mushah went into the Tent of Meeting to speak with Him, he heard the voice of One speaking to him from above the lid of atonement that was on the ark of the Witness, from between the two kerubim. Thus He spoke to him.

In this Torah Portion we learn that YaHuWaH hates adultery and is fair in judgment caused by jealousy. We also see the comparison of the bitter waters to adultery, just as the children of Yashar’al complained at the bitter waters in the wilderness. There is also a wonderful picture of Messiah found in the Kohan who “puts the Name of YaHuWaH” on the people. We know Yahuwshuwa said “to him who overcomes I will write upon him the Name of my Aluahym (Elohim).” Also we see YaHuWaH is a mighty one of order and respect by his specialized counts and processions of tribal leaders. May we also be students of respect and honor who are sealed in our foreheads with the great and awesome Name of YaHuWaH!