Hebrew Word/Phrase of the Week: Noach

This week’s Torah Portion is called Noach (נח), the Hebrew word related to “ rest, or comfort.” Genesis 5:29 says, ” and (they) called his name Noach saying , “This one does comfort us concerning our work and the toil of our hands, because of the ground which YHWH has cursed.”

Chapter 6 (cont.): In our last lesson, we left off where YHWH said he is going to wipe man and beast off of the face of the earth. But Noach, found favor. Noach was a righteous man, that walked with Elohim. He had 3 sons: Shem, Ham, and Yepheth. The earth was filled with a lot of violence and YHWH tells Noach how to build an ark (a really big boat). YHWH is going to flood the earth because of all the evil. So Noach, does all that YHWH commands him.

Fun Fact: Did you know that Noach’s ark had 3 levels? A lower, a second and a third deck!

Chapter 7: YHWH tells Noach to go into the ark with his wife, three sons and their wives. He takes a male and female of every single type of unclean animal and 7 pairs of the clean animals. Of course, there is food and water for everyone too. When all of Noach’s family and the animals are inside, YHWH shuts them in. The rain becomes a flood and the foundations of the great deep are opened. The earth continues to be flooded for 40 days and 40 nights. Everything on land is destroyed and the waters stayed mighty on the Earth for 150 days! 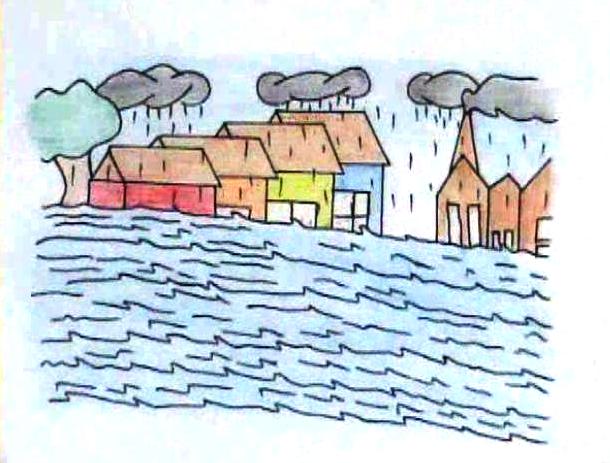 Fun Fact: Noach was 600 years old when the flood waters were on the earth!

Chapter 8: YHWH remembers Noach and all the animals, and makes a great wind to pass over the Earth. At the end of the 150 days, the water diminishes. The ark settles on Mount Ararat and Noach sends a raven and then a dove out to see if there is dry land. A dove comes back with an olive branch in its beak and when sent out again, doesn’t come back at all. Noach knows that the earth has dried, but he waits 7 more days until YHWH let’s him know it’s okay to leave the ark. Noach then builds an alter and offers lots of offerings on the slaughter-place. YHWH smells a soothing fragrance and says in his heart that he will never again curse the ground because of man. 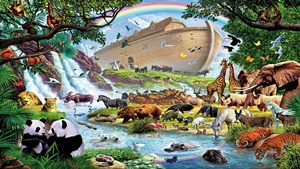 Chapter 9: YHWH baruk (blessed) Noach and his sons, telling them to be fruitful. He says that never again would he cut off ALL flesh from the waters of the flood, and that never again is a flood to destroy the earth. YHWH sets his rainbow in the cloud so it will be a sign of his covenant between him and Noach, and all of Noach’s generations to come. Noach lives to be 950 years old, and passes away.

Fun SCIENCE Fact: Supposedly, to see a rainbow, you must stand with your back to the sun, otherwise it will not be visible.


Chapter 10: Noach’s sons begin to have sons, who have sons, who have more sons! Soon, there are now clans in their lands, with their own nations! And lawlessness begins to creep in. One of Noach’s great-grandsons from the line of Ham, is Nimrod. He becomes the King of Babel, reigns over alot of bad places and even builds Nineweh. All bad places!

Chapter 11: And all the earth has one language. Soon after, people get together and decide to build a tower whose top is in the heavens. At this point YHWH stops them by making all the people speak a different language. This is why the name of the city was called Babel. Because there, YHWH confused the language of all the earth, so no one could understand each other. YHWH scatters them all over the face of the planet.

Fun Fact: Through the line of Shem, Noach has a great-great grandson named “Peleg, for in his days the earth was divided .” This is how YHWH scatters them all over the face of the planet.