“And Yahuwah spoke to Mosheh, saying, “Speak to the children of Yisrael (Israel), that they take up a contribution for Me. From everyone whose heart moves him you shall take up My contribution.” Shemoth (Exodus) 25:1-2

YaHuWaH commanded Mosheh (Mushah) to take a contribution or תְּרוּמָה Terumah which literally means an “uplifting.” The contribution was to be gold, silver, and copper; along with blue, purple, and scarlet -dyed wool, fine linen, and goat [hair]; rams’ skins dyed red, tachash skins, and shittim wood. Oil was to be provided for the light; spices for the anointing oil and for the sweet incense, along with Shoham stones, and gemstones for setting in the Efod and in the breastplate of the Kohen HaGadol (Chief Priest).

Mosheh (Mushah) received the profound revelation by vision from YaHuWaH on the mountain of Sinai, to build a mishkan or “dwelling” in which YaHuWaH would “dwell in the midst of them” as a perpetual manifestation in the camp of Yisrael (Israel).  Mosheh is commanded to make the mishkan according the pattern he was shown.  This is clear evidence that YaHuWaH showed Mosheh his mishkan (dwelling place) in the Shamayim (space/heavens) in the vision.   YaHuWaH had just entered into a contract of “marriage” with his people. Now he instructs Mosheh, the “mediator of the covenant” to build a habitation for him so he can “consummate” his marriage. In ancient times and even until today it is customary for Hebrews (Abrym/Ibrim) for to be married under a chuppah, which is a large tent like tapestry often a tallit or “prayer shawl” as it has been called. In fact Tallit means little tent and is often called a mishkan or dwelling place for this reason. However this dwelling place would serve for far more than just a picture of “marriage” or “the covenant.” The מִשְׁכַּן mishkan or dwelling place is also called a מִקְדָּשׁ mikdash, meaning “Sanctuary,” and commonly referred to as אֹהֶל ohel meaning “the Tabernacle”. This אֹהֶל or “tabernacle” would literally open a portal between two different worlds; it would bridge the gap between this earthly existence and the dwelling place of the infinite one himself! Later in time it was the Mishkan that provided the pattern for the Qodesh (Set Apart) Beit HaMikdash (House of the Sanctuary also called the “temple”). This of course would be placed where Ya’acob had his vision of the ladder that stretched from the earth to the Shamayim (space/heavens).

Before making the structure of the mishkan, YaHuWaH gave Mosheh (Mushah) instructions for the “vessels” which are various furnishings that the Tabernacle housed. 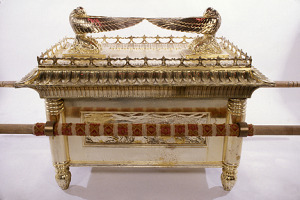 The Ark is to be constructed in the form box, 2.5 cubits long, 1.5 cubits wide, and 1.5 cubits high. It is constructed from shittim (acacia) wood and overlaid inside and out with pure gold, and a gold “crown” around its border. Two poles, also of gold-covered shittim wood, were to be inserted into four gold rings attached to the four corners of the ark. This was to make the Ark transportable.

The poles shall be in the rings of the Ark; they shall not be removed

“And you shall make two cherubim of gold… at the two ends of the cover.”

“And the cherubim shall stretch out their wings on high, overspreading the cover with their wings, and their faces shall look one to another.”

Cherubim are higher beings that serve YaHuWaH by both leading his chariot and by guarding his throne. They worship him day and night without ceasing. A description of a Cherub can be found in Ezekiel chapter 1. The Kaporet with its two cherubim should be hammered out of a single block of pure gold.

I will speak with you from above the Kaporet, from between the two cherubim which are upon the Ark of the Testimony, of all things which I will give you in commandment to the children of Yashar’al (Israel).

The primary function of the ark is to house the two Tablets of Testimony, engraved with the Ten Words, “which I shall give to you.” However this would also serve as the “throne of YaHuWaH” on the earth! 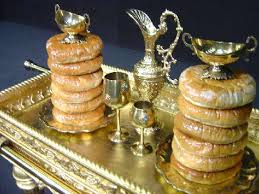 The Table is to be overlaid with gold, given a gold crown along its border, and has four gold rings affixed to its corners for its two carrying poles. The purpose of the Table is to hold the לֶחֶם פָּנִים lechem hapanim (“showbread” or literally bread of the faces), which were arranged in stacks of six loaves each. The Table’s fixtures include pans, frames and horizontal supports on which these were arranged, and two small bowls for the levonah (incense) displayed on the Table. 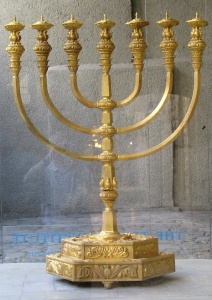 “And you shall make a Menorah of pure gold. Of beaten work shall the Menorah be made-its shaft, its branches, its cups, its bulbs, and its flowers, shall be [hammered] of the same [piece of gold].”

The Menorah would be the only source of light in the otherwise dark Mishkan (dwelling place).  It is made to look like a tree to represent both the “Tree of life” and “The burning bush.” 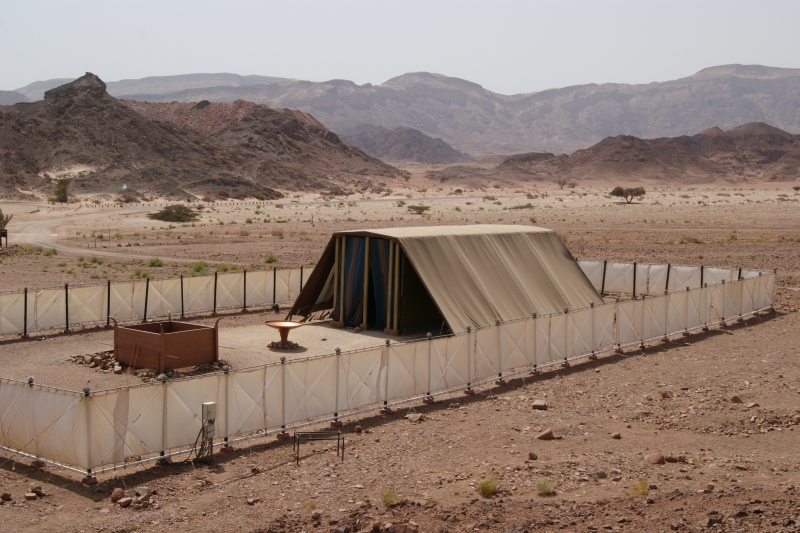 The Mishkan as a whole consisted of an outer court yard or “chotzeir” and the tent or “ohel”. The tent or “ohel” would be located in a large courtyard or “chotzeir” that was 100 cubits long and 50 cubits wide (a cubit is 19 inches, or 50 cm). A linen barrier that was held up by wooden poles and fastened to the ground with stakes surrounded the courtyard. In the center of the courtyard stood the large copper altar, which was used for animal sacrifices. The altar was very large insomuch that there was a long ramp leading up to the top. Between the sacrificial altar and the entry of the tabernacle stood the bronze laver where the Kohanim (Priests) would wash their hands and feet.

The tabernacle itself was 30 cubits long and 10 cubits wide. The walls were made of thick, gold-plated, acacia-wood beams. The beams were interlocking with silver sockets that were held in place by long, gold-plated, poles. The roof of the tabernacle was a tapestry, woven of linen and red, blue, and purple wool. The tapestry had attached by a row of hooks. A layer of goat hair, its panels similarly attached with hooks, covered the tapestry. These two layers covered the top of the structure and hung over the wooden walls of the Mishkan. Red-dyed ram skin and tachash skin covered the roof. According to Rabbinic sources the Tachash is an animal that is now extinct or extremely rare, Christian commentaries often say the tachash was a badger which is an unclean animal. The front (east) end of the Mishkan has no boards, but should be covered with a “screen” (masach) held up by five pillars of gold-covered shittim wood inserted into five copper sockets.

The “Ohel” or tent type structure was divided into two chambers. The first chamber was called “HaQodesh” or “the set-apart” and was only accessed by Kohanim or Priests who had duties to perform. In this chamber was the shulchan or table of showbread, the menorah or seven-branched lampstand and HaKatoret, which is the altar of incense.

The innermost chamber was only accessible through a large veil tapestry that divided the Tabernacle. This inner chamber is known as Qodesh HaQodeshim or, “set apart of the setapart” which has been called the “holy of holies” (holy being of pagan origin makes “set apart” more accurate). In the Qodesh haQodeshim or “most set apart place” contained the aron ha’brith or “ark of the covenant” which would contain the two sapphire tablets, called the ten words. No one could enter the Qodesh HaQodeshim where the aron ha’brith or Ark of the Covenant would be except for the Kohen HaGadol (Chief Priest) who only entered once a year on Yom HaKippurim (Day of Atonement). 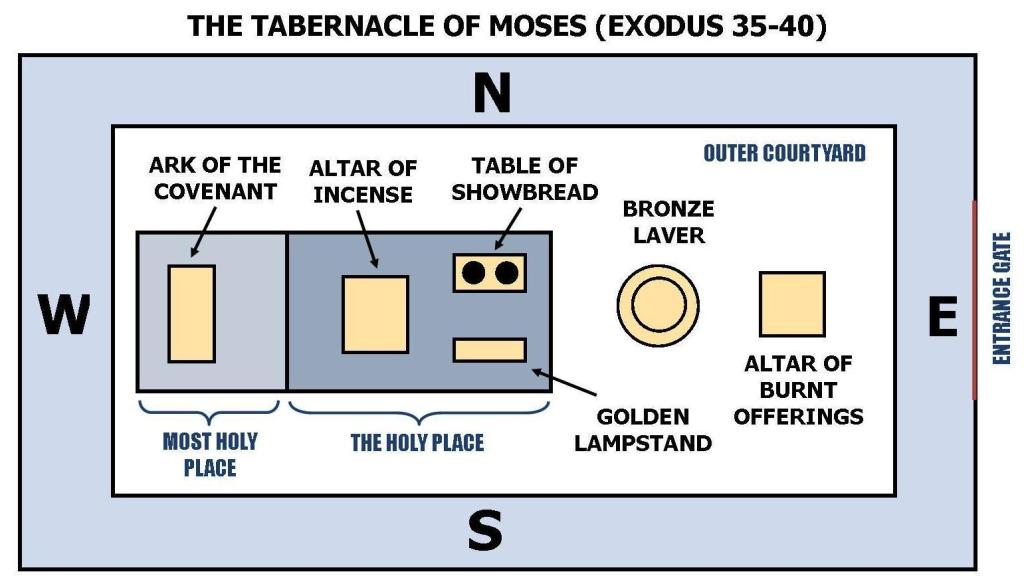 The building of the Mishkan parallels the Creation account:

First Day- Scripture states “he who stretches out the shamayim (heavens) like a curtain-Psalm 104:2 For the Mishkan he says “And you shall make curtains of goat’s hair for a tent over the Tabernacle”– Exodus 26:7

Second Day- “Let there be a firmament… and let it divide between the waters and the waters”-Genesis 1:6 For the Mishkan he says “And the veil shall divide for you between the Qodesh and the Most Qodesh.”-Exodus 26:33

Third Day- “Let the waters under the shamayim be gathered together”-Genesis 1:9 For the Mishkan he says “And you shall make a copper basin, and the base thereof of copper, for washing”-Exodus 30:18

Fourth Day- “Let there be luminaries in the shamayim”-Genesis 1:14 For the Mishkan he says “And you shall make a menorah of pure gold”-Exodus 25:31

Fifth Day- “Let fowl fly above the earth”-Genesis 1:20 For the Mishkan he says “The Cherubim shall spread out their wings”-Exodus 25:20

Sixth Day- “Let us make man” Genesis 1 For the Mishkan he says “Bring near Aharon your brother to perform service in the Santuary”– Exodus 28:1

Further we see the picture of the Menorah representing the seven days of the week. The 12 loaves of showbread represent the 12 constellations. Even the colors used point to the creation. All of these physical types and shadows are also a picture of something very spiritual.

The outside of the Mishkan was covered in skins.  The outside didn’t look so spectacular but on the inside were the treasures of YaHuWaH. The suffering servant who is Yahuwshuwa HaMashyach is also pictured here, the prophet YashaYAHUW (Isaiah) stated “he has no form or splendor that we should desire him.” The laver in the outer courtyard was a picture of Messiah as well, who stated “if any man believes in me from his innermost parts will come living waters.” Of course we know Yahuwshuwa is also called “the lamb of YaHuWaH” which is an obvious picture of the alter. Yahuwshuwa said he is “the light of the world”, a picture of the Menorah, he is said to be a lamb with seven eyes in the book of Revelation which is also a picture of the Menorah. He claimed to be the “bread of life” which is a picture of the table of showbread. We know he is a Kohen (Priest) forever according to the Malki Tzedek Kahuna (Priesthood). As a Kohen in the Shamayim (Heavens) we know he offers up prayers and incense for us. It is Messiah who comes into the Qodesh haQodeshim but not the one made with human hands but the one that is in Shamayim (heaven).  Even the hooks used to hang the curtains and skins point to Yahuwshuwa, as the word for hook is waw which is the third letter in YaHuWaH’s Name and can also mean nail.  The word for skin is bashar which is the same word in Hebrew for “glad tidings.” 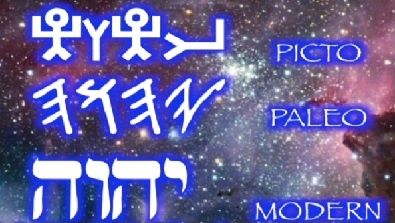 We see in the picture of the Tabernacle the steps of redemption. The first thing encountered in the outer courtyard is the alter, a picture of the lamb, then comes the laver which is a picture of immersion. After this only Kohanim (Priests) can go further into the intimate place of YaHuWaH’s Mishkan. This is a picture of those who are spiritual going deeper into the things of YaHuWaH. The Prophets have told us that Messiah will build a House for YaHuWaH. If you look at the book of Ezekiel you will see the lengthy description for the House. It is from this House that the Torah will go forth into all the world!