Hebrew Word/Phrase of the Week: Tetzaveh

This week’s Torah Portion is called Tetzaveh (תצוה), meaning, ‘You shall command’. YHWH gives the commands of lighting the menorah, what the Kohanim (Priests) are to wear, how to set them apart and how to build the incense table.

Chapter 27 (cont.): Last week when we read most of this chapter, we left off with the draperies and the courtyard of YHWH’s tabernacle. This time, YHWH lets Moshe know that the children of Yashra’el are to bring clear oil from pressed olives for the light, and to keep the menorah (lampstand) burning continually. Aharon and his sons are to watch over it, and this is a law forever.

Fun Fact: The pressing of olives to make olive oil dates back to about 3000 B.C.E.  All olives start out green and turn to black or dark purple. When the olive is green, they are tasty but do not have that much oil. When the olive is black the tastes are less intensive and they are very oily. Even some remains of olive oil have been found in jugs over 4,000 years old in an island of Naxos.

Chapter 28: Next they needed really special, set-apart clothes for Aharon and his sons to wear. Since they are YHWH’s chosen kohanim (priests), it was important that their clothes show esteem and have beauty. So for the Kohen-HaGadol (High-Priest), YHWH chose extra special fine linens made in blue and purple and scarlet, embroidered and adorned with gold, a breast-plate made of beautiful jewels, a special turban that says, ‘Set-apart to YHWH’, and bells and pomegranates on the bottom of his hem. The rest of the kohanim just had to wear the long linen shirt, linen pants, a turban and a girdle (sash belt).The kohamin (priests) wore these whenever they did their services in the Mishkan (tabernace). 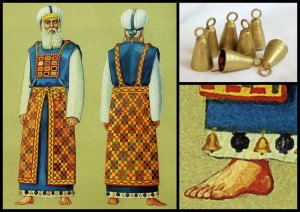 Chapter 29: YHWH then tells Moshe how to set Aharon and his sons apart as the Kohanim (priests). This took a process of preparation including cleansing, a few different offerings (a bull, unleavened bread and unleavened cakes and wafers made with oil), anointing with oil and putting on all of their required garments before entering. They and their children were to be the Kohanim as an everlasting law.

Chapter 30: And don’t forget the slaughter-place to burn incense on! YHWH instructs Moshe to make it of acacia wood, and overlay it and it’s accessories to lift it with, in clean gold. This was to be in front on the veil that went before the ark, and Aharon was to burn incense on it every morning and every evening. This was also the special place that Aharon was to make atonement for the people once a year! YHWH even says, ‘It is most set-apart’ to him. And this wraps it up for this week.

Fun Fact: Gold is so rare that the world pours more steel in an hour than it has poured gold since the beginning of recorded history. Gold has been recycled ever since it was first discovered, and has been found on every continent on earth. Some of the gold in today’s jewelry is recycled from ancient artifacts and coins!

Want to know more? Join us next time as we read on!