This week’s Torah Portion is called Vayikra (Wayyiqra) (ויקרא), which is “And He called.” This portion gives us more of the details about the offerings, and the different ones for different situations.

THE BURNT OFFERING
Chapter 1: YHWH spoke to Moshe, and told him what to tell the children of Yashra’el. And YHWH said, that when the people brought a burnt offering to the Kohanim (priests), to bring livestock from the herd or the flock. And if it was from the herd or the flock, it needed to be a perfect male (not having any blemishes or anything wrong with it). YHWH instructs Moshe on how the Kohanim (priests) are to prepare, clean and offer it. He also tells Moshe that if the burnt offering is a bird, they could use turtledoves or young pigeons, and how they could prepare, clean and offer those as well. 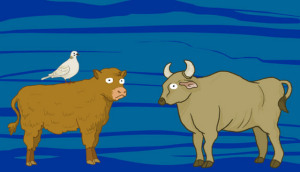 Fun Fact: YHWH tells Moshe that the burnt offerings, made by fire, are a sweet fragrance. The burnt offering is also the only offering that’s totally consumed on the alter, and none of it gets eaten by the Kohanim (priests), or the person bringing it. It is also the most common offering mentioned in the scriptures. It’s mentioned 197 times.

THE GRAIN OFFERING
Chapter 2: And when anyone brought a grain offering to YHWH, it needed to be made from unleavened fine flour, with oil and frankincense on it. They were to bring it to the sons of Aharon, and the Kohen (priest) would burn it as a remembrance portion (YHWH refers to this as a sweet fragrance also). The rest of the grain offering was for Aharon and his sons. And when the people brought an offering of grain, it could be baked in the oven, cooked on the griddle, or cooked in a stewing-pot, all made with unleavened fine flour. Whichever way the person presented the Kohen (priest) with their grain offering, the Kohen (priest) would bring it to the altar and offer the remembrance portion. And this too, was a sweet fragrance to YHWH.

Now when it came to breads made with leaven (fluffy tall breads) and honey, YHWH said not to burn those! In fact, no grain offering or any honey in an offering was to be made by fire. YHWH told them that those should be used as a first-fruits offering, which was not presented by fire.

Fun Fact: Don’t forget the salt! YHHW told Moshe that with all people’s offering, they were bring salt with it.

THE SHALOM (PEACE) OFFERING
Chapter 3: As for the shalom (peace) offerings, some of the guidelines were the same but it was bit different too. In this case they could use a perfect male or a perfect female from the herd or the flock (only males for the burnt offering). The method of presenting it to YHWH was about the same, but YHWH really emphasized here how important the fat was. He even says that the fat belongs to YHWH, and not to eat any blood, and that this was an everlasting law throughout your generations (you do not eat any fat or any blood). And the Kohen (priest) would burn it on the altar as food, an offering made by fire for a sweet fragrance.

Fun Fact: This was the only offering that the person bringing it could eat some of the meat from the offering.

THE SIN OFFERING
Chapter 4: But when anyone sinned by mistake, the requirements were more specific. If the Anointed Priest sinned, he would bring a perfect, young bull as a sin offering. And with the burnt and the shalom (peace) offerings, the blood would be sprinkled on the alter outside the Mishkan (Dwelling Place). The blood was sprinkled 7 times inside the Mishkan, in front of the veil of the set-apart place. The Kohen would also put blood on the horns of the alter of sweet incense, and pour all the blood of the bull at the base of the altar of the burnt offering. Then he would take all the fat of the bull as the sin offering and burn it. All the remains of the bull would then be taken outside the camp to a clean place, where the ashes are poured out, and burned on wood with fire. This was a very serious matter!

And if the whole congregation sinned by mistake, they would have to do all these things as well, but all the elders of the congregation would place their hand on the head of the bull while the Anointed Priest would sprinkle the blood seven times in front of the veil. The High Priest would then put some of the blood on the horns of the altar, and pour all the blood at the base of the altar of the burnt offering.

But what if a ruler sinned by mistake, or realized that he sinned? Then he would bring a perfect male goat and they would do everything else the same as if anyone sinned by mistake. And if any being of the people of the land sins by mistake, then he shall bring a perfect female goat as his offering. And if he brings a lamb as his sin offering, he brings a perfect female. Then the priest would burn it on the altar, according to the offerings made by fire to YHWH.

Fun Fact: The sin offering was a required offering (Everybody sins!). It’s also not mentioned as a sweet fragrance, which tells us YHWH doesn’t like sin.

THE TRESSPASS/GUILT OFFERING
Chapter 5: Next YHWH goes on to say what kind of offerings they should do in cases where a person was unclean for reasons such as concealing a matter, uncleanliness or speaking rashly. And if the person was guilty of one of these, he had to confess his sin and bring a guilt offering. This offering would be a female from the flock, or two turtledoves (or two young pigeons), one for a sin offering and the other for a burnt offering. In cases where someone committed a trespass, they were to bring a perfect ram to the Kohen (priest) as a guilt offering. And the Kohen (priest) would make atonement for the person’s mistake he committed unintentionally.

Chapter 6: And when anyone trespassed against YHWH, and lied about money, or a robbery, lost and found items or things of this nature, he had to return what he found and add one-fifth more to it, on the day of his guilt offering. Then he could bring his guilt offering (a perfect ram) to the priest.