Hebrew Word/Phrase of the Week: Tzav

This week’s Torah Portion is called Tzav (צו), which is “Command.” The laws that YHWH gave Moshe previously are repeated here, but this time to the Priests so they could be carried out.

Chapter 6: (cont.) Last week, we learned about the different types of offerings. As we continue to read on in this chapter, YHWH gives us more of the details about how the Kohanim (priests) are to handle the offerings. As for the burnt offerings, it is burned on the altar all night, and into the morning. The fire of the altar was to be continually burning and not put out. When the Kohen (priest) was ready to move the ashes from the altar, he would wear his special garments to put the ashes beside the altar. Then he would need to change into other clothing to bring the ashes outside the camp to a clean place.

And do you remember how the remainder of the grain offering was for Aharon and his sons (last week’s Torah Portion)? They were to eat it with unleavened bread and this was a law for all their males, throughout all generations. YHWH says that he has given this to them as their portion of his offerings that are made by fire. These offerings of grain were done half in the morning and half at night, and the Anointed Priest was to prepare it.

As for the Sin offering, the Kohen (priest) who was making atonement ate it. And if any blood was sprinkled on any garment, they had to wash it and any earthen vessel that it was cooked in had to be broken. If it was cooked in a bronze pot, then it would be scoured and rinsed in water.

Fun Fact: Not only did the Kohen who was making atonement eat that offering, but every male among the Kohanim (priests) ate of it. It was most set-apart.

Chapter 7: When it came to the guilt offering, every male among the Kohanim were to eat that too. So how did all of the Kohanim eat of these offerings? Well in short, YHWH said whichever priest who made atonement with that specific offering, became his afterwards. And when the Kohen (priest) brought anyone’s burnt offering, the skin of the burnt offering he brought, was his. Grain offerings were the same in that the priest that offered it would have it as his portion afterward also.

Chapter 8: And so Moshe sets the priests apart, and does everything YHWH showed him to get the priests prepared for their starting duties. This was because they needed to be set-apart before they could start doing their duties in the most set-apart place! So Moshe washes them with water, gets them dressed and anoints them and the Dwelling Place with oil. 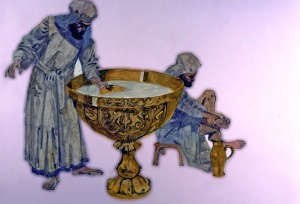 He then sacrifices offerings to YHWH and the priests were to cook and eat their portions, and burn what was left over. The priests stayed at the Tent of Meeting for 7 days and 7 nights and did all that Moshe commanded them.

Fun Fact: Before the Kohen (priest) could cook and eat their portion, they did what’s called a ‘wave offering’. This was when they literally waved their portion of meat in the air as a part of the offering before it was theirs to eat.