Hebrew Word/Phrase of the Week: Vayetze

Meaning: ‘And He Went Out’

This week’s Torah Portion is called Vayetze (ויצא), and it means “and he went out”, just as the first verse of our torah portion says, “And Ya’acob went out from Be’ersheba..” (Bereshith 28:10). This portion tells us about Ya’acob’s life after leaving home. It’s about working for his uncle Laban and how Ya’acob gets deceived this time!

Chapter 28 (cont.): In our last lesson, Ya’acob was told to flee to Laban’s house (his uncle’s home) and stay there until his brother Esaw calms down. His parents also tell him he is to take a wife from the daughters of Laban. Ya’acob leaves as he is told, and when the sun sets, he stops in a city called Luz to rest for the night. He rests his head on a rock and falls asleep. In his dream, he sees a ladder from the earth that reaches up to the shamayim (heavens), and there are messengers of YHWH going up and coming down from it. YHWH is above the ladder and tells Ya’acob that the land where he is lying will be given to him and his seed after him.

Ya’acob rises early in the morning and makes a standing column there, using the rock he slept on and pours oil on top of it (In the scriptures, anointing a person or place with oil is a way of showing that the person or place is set-apart). He then calls the place Beyth El.

Fun Fact: The place Ya’acob rested his head happened to be Mount Moriyah! The same place Yitshaq was almost sacrificed in an earlier lesson, and the same place the temples would be built later on!

Chapter 29: Ya’acob gets to Haran and asks a couple of shepherds if they know of Laban. They say yes, and as they are speaking, his daughter Rahel comes with her sheep (She is a shepherdess!). Ya’acob waters her sheep, kisses her and cries. He tells her who he is, and she runs to tell her dad. Her father, Laban (who is also Ya’acob’s uncle) runs to meet him and hugs him.

Fun Fact: Sheep are mentioned in the scriptures 178 times, and lambs 105 times. That’s more than any other animal!

Ya’acob stays at Laban’s and helps out for a month. Laban then asks Ya’acob how much he should pay him since he is a relative and shouldn’t work for nothing. Ya’acob tells Laban that he would work for him for 7 years if he can have Rahel as a wife. They agree and the years seem like days to Ya’acob because he loves her so much. The time comes and Laban gathers all the men of that place together and they have a feast.

That night, Laban gives Ya’acob Leah (Rahel’s older sister) instead! Even worse, Ya’acob doesn’t realize he’s been tricked until the morning when he wakes up!

He talks to Laban and Laban says that in their country, they don’t give away the younger before the first-born. Ya’acob agrees to work another 7 years, but for Rahel this time. Soon enough, they are married also and Leah knows that she is not loved like Rahel is. She prays to YHWH and she has a boy, named Re’uben. Followed by another (Shim’on), then another (Lewi), then another (Yahudah)!

Leah, no longer having anymore children, gives Ya’acob her maid Zilpah as a wife too! Zilpah ends up having Gad and then Asher for Leah. After this, YHWH listens to Leah’s prayers and she has more children of her own! She gives birth to Yissaskar, then later on Zebulun, and then later another child. This time a girl named Dinah. Finally, the time comes that YHWH remembers Rachel and she finally has her very own son and names his Yoseph (Yahuseph).

Eventually, after many, many years and a whole lot of drama, Ya’acob is ready to go back home to his parents land, but Laban wants him to stay longer. They work out a deal that if Laban agrees to give Ya’acob all his speckled and spotted sheep and goats, he will stay a little longer. And so he did. 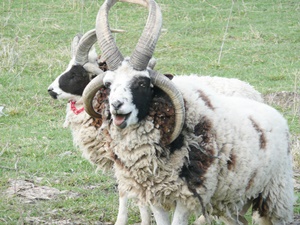 Fun Fact: You know how Ya’acob is called Jacob in English? ‘Jacob sheep’ is a type of sheep named after Ya’acob, because he chose the spotted sheep for his flock. It is commonly believed that the Jacob sheep of today are descendants of those sheep.

Chapter 31: Now it comes to be, that Ya’acob notices that Laban is not treating him like he used to, and YHWH reveals to Ya’acob that it is time to go home. When Ya’acob leaves with all his things, Laban chases after him. They end up making a deal that they won’t do any evil to each other and Laban returns home after staying the night with them.

Chapter 32: Ya’acob is now on his way home! (To be continued next week!)