Genesis 25:19 And this is the genealogy of Yitshaq, Abraham’s son. Abraham brought forth Yitshaq. 20 And Yitshaq was forty years old when he took Ribqah as wife, the daughter of Bethu’el the Aramean of Paddan Aram, the sister of Laban the Aramean.

The name of this week’s Torah portion is תֹּולְדֹת “Toldot” meaning “generations or ancestries”.  W’eleh toldot Yitshaq, and these are the ancestries of Yitshaq.  Yitshaq the promised seed of Abraham, married Ribqah the Aramean. The Torah tell us that Ribqah was barren and Yitshaq “prayed to YaHuWaH” and YaHuWaH opened the womb of Ribqah. This parallels the life of Abraham and Sarah in many ways. We also see that Ribqah inquired of YaHuWaH concerning the troubles of her pregnancy and discovers by word of YaHuWaH that she is having twins!

Genesis 25:23 And YaHuWaH said to her, “Two nations are in your womb, and two peoples shall be separated from your body. And one people shall be stronger than the other, and the older serve the younger.”

The name of the firstborn was עֵשָׂו Esau meaning “hairy” or “complete”, because he came out “red (אַדְמוֹנִי) and covered with hair “. His younger brother was birthed with his hand grasping Esau’s heel. Therefore  they named him יַעֲקֹב Ya’aqob meaning “supplanter,” from the Hebrew root meaning “heel”. Just as Yishmael and Yitshaq before them, Esau the eldest would serve the younger Yaacob.

Esau grew to be “a skillful hunter, a man of the field,” while Yaacob was ish tam yosheb ohalim, “a wholesome man, who lived in tents.” Yitshaq favored Esau the eldest; but Ribqah , believing the prophecy from YaHuWaH (Gen. 25:23), favored Yaacob.

One day while Yaacob was cooking a lentil stew, Esau rushed in from hunting, hungry and growing faint. Esau begged Yaacob to give him some of “that red stuff” (ha’dom hezeh: הָאָדם הַזֶּה),but Yaacob would only give him some in exchange for his birthright. Esau, only thinking of the here and now and the feeding of his flesh, gladly accepted some of “that red stuff” (lentil stew) for the price of his birthright. He traded his royal heritage for a meal of poverty. Esau ate and left thus waiyiven Esaw et-habechorah, “Esau spurned or despised the birthright”. Esau would then be called Edom, which means red, because of the stew he loved more than his inheritance.

YaHuWaH appeared to Yitshaq just as he did to his Father Abraham and he re-established his covenant with him!

Genesis 26:4 “And I shall increase your seed like the stars of the heavens, and I shall give all these lands to your seed. And in your seed all the nations of the earth shall be blessed, 5because Abraham obeyed My voice and guarded My Charge: My commands, My Laws and my Torot (Torahs/instructions).

The word תֹּורָה Torah is a singular noun meaning instruction or law, in the above passage this word is in the plural implying Abraham had a firm grasp on the entirety of the instructions and laws of YaHuWaH.  Torah has become synonymous with the five books (seferim) of Prophet Mosheh (Mushah/ “Moses”) due to the design and content of the revelation therein.  However it is  vital to realize that Abraham kept Torah before it was written down at Mount Sinai! This is the reason the Toldot (genealogy) is important, because Abraham passed down the covenants, laws and Torah to his promised seed Yitshaq.

Genesis 26:24 And YaHuWaH appeared to him the same night and said, “I am the Elohim of your father Abraham. Do not fear, for I am with you, and shall barak you and increase your seed for My servant Abraham’s sake.” 25And he built an altar there, and called on the Name of YaHuWaH, and he pitched his tent there, and the servants of Yitshaq dug a well there.

The word “called” is qara which means pronounce, call, preach and profess!  Like his Father Abraham, Yitshaq also professed YaHuWaH alone as the omnipotent Master of all creation and made sacrifice unto his awesome name.

According to the revelation of YaHuWaH’s Torah the firstborn is to receive a double portion. The first portion is the physical inheritance, the double portion is the spiritual inheritance. In the last days of Yitshaq’s life he decided it was time to pass down this berikah “blessing” literally a gifting of favor upon his eldest, Esau. Yitshaq instructed Esau to go hunt and prepare a stew, after eating Yitshaq would then give Esau the berikah which means gift or “blessing”.

Ribqah overheard the plan and instructed Yaacob to prepare a stew, and present it to Yitshaq dressed as Esau, with his arms and neck covered with a goatskin to simulate the feel of his hairy brother. Ribqah was acting as a nab or “prophetess” of YaHuWaH, for she knew Esau despised his birthright and that Messiah (Mashyach) would come though the the ancestry of Yaacob. Yaacob received his Father’s berikah, “the dew of the heaven and the fat of the land” even the mastery over his brother was given to him. Yitshaq baruch Yaacob saying “Let peoples serve you, and nations bow down to you. Be master over your brothers, and let your mother’s sons bow down to you. Cursed be those cursing you, and blessed be those blessing you!” Yitshaq was old and blind and did not know what he had done.

Esau returned with a meal for his father and all was made known. Yitshaq however refused to revoke the berikah he had given to Yaacob. Therefore Esau plotted to murder his brother for “stealing his birthright” though technically he had sold it to him for the price of lintels previously. Ribqah, knowing the plot of Esau to kill his brother, sent Yaacob to Laban, her brother, instructing him not to take and idol worshipper as wife from the son’s of Heth..

Yaacob and Esau may be twins but they are polar opposites, a paradox of personality. Esau represents the world, the sinful and fleshly nature. Just as the wicked people of the world are esteemed, only for a season. All of their esteem will go to the Son of Promise, Yaacob who is a picture of the Messiah (Mashyach) who will rule and reign over all the earth!  Yitshaq again  baruch or “blessed” Ya’acob instructing him to go to Padan Aram to the house of Bethel and take a wife from the daughters of Laban.  Fu

Beresheeth (Genesis) 28:3“And El Shaddai bless you, and make you bear fruit and increase you, and you shall become an assembly of peoples,4 and give you the blessing of Abraham, to you and your seed with you, so that you inherit the land of your sojournings, which Elohim gave to Abraham.”5So Yitshaq sent Ya’aqob away, and he went to Paddan Aram, to Laban son of Bethu’Ãl the Aramean, the brother of Ribqah, the mother of Ya’aqob  and Esaw. 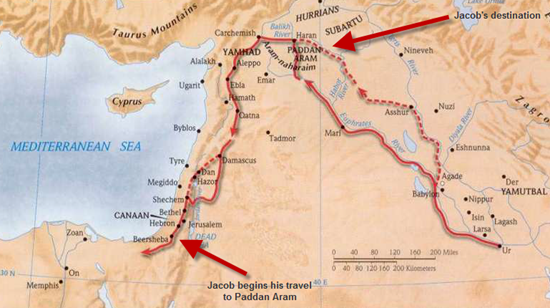 Yaacob would go on to marry the daughters of Laban the Aramean, the brother of Ribqah which we will cover further. YaHuWaH later renames Ya’acob Yashar’El (Israel) , he is the Father of the 12 tribes of Yisra’El (Yashar’al). Esau/Edom married pagan women, two were Hittites and the other an Ishmaelite, this was a source of bitterness for Yitshaq and Ribqah. Esau would become the ancestor of the Edomites. Edomites mixed and mingled with other nations thus King Herod, the Edomite ruled over Yahudah (Judea) during the first century. It was this King Herod who tried to kill Yahuwshuwa the Messiah when he was just a child! This is an echo in history of the plot of Esau to exact his revenge by shedding his brother’s blood also a picture of Qayin (Cain) who killed his brother Hebel (Abel) out of jealousy. Let us not go in the way of Esau, feeding the flesh and despising the inheritance but let us be like Yaacob who loved his Father’s house and by righteousness inherited the birthright. Just as Abraham and Yaacob would be strangers and sojourners in this world, so we too must be separate from the world!