Hebrew Word/Phrase of the Week: Vayechi

Meaning: ‘And He Lived’

This week’s Torah Portion is called Vayechi (ויחי), meaning, “And He Lived”. The first sentence of this portion says, “And Ya’acob lived in the land..”. Ya’acob’s time comes to pass away and later on, Yahuseph’s (Yoseph’s) also.

Chapter 47 (cont.): Last week, we left off with Yahuseph’s (Yoseph’s) family moving to Mitsrayim (Egypt) to be with Yahuseph and he is reunited with his father Ya’acob (Yashra’el), who is now much older. Ya’acob (Yashra’el) makes Yahuseph swear to him that he will not bury him in Mitsrayim, but that he should take him up out of Mitsrayim and bury him with his father’s in their burial-place.

Chapter 48: And the time comes that Yahuseph hears that his father is sick, and he brings his two children with him, Menashsheh and Ephrayim to see him. When he comes, Ya’acob sits up in his bed and gives Yahuseph’s children a very special berikah (blessing). He barak (blesses) both the children to be as his children, and called by his name. And to Yahuseph’s surprise, he puts the younger one (Ephrayim) first, meaning that he would be greater than his older brother (Menashsheh). Ya’acob also tells Yahuseph that Elohim will be with Yahuseph and bring him back to the land of his fathers, and Ya’acob gives him a portion above his brothers.

Fun Fact: Ya’acob spent his last 17 years of life in Mitsrayim. That’s how old Yahuseph was when he was taken to Mitsrayim!

Chapter 49: And so Ya’acob calls his sons to him to tell them what will be become of them, and barak (blesses) them. Because the first three sons did very bad things before, the scepter is given to the next in line, Yahudah, and Yahuseph is given a very special berikah (blessing). Ya’acob tells the brothers where they are to bury him and when is done speaking to them, he breathes his last breath.

Chapter 50: Yahuseph weeps over his father, and has him embalmed. When the days of embalmment are over, the Mitsrites weep for him 70 days. When the time is past, Yahuseph speaks to Pharaoh’s household and asks them to ask the Pharaoh to let him go bury his father as he promised him before he died. Pharaoh lets him go and with Yahuseph, comes all the servants of Pharaoh, the elders of his house, all the elders of Mitsrayim, all the house of Yahuseph, his brothers, and his father’s house.

Fun Fact: When they leave to bury Ya’acob in his homeland, only the little ones, the flocks and the herds are left in Goshen.

They leave with horsemen and chariots, and a very great company. They bury their father as promised and weep for him there 7 days. When they return, the brothers are worried that now that their father is gone, Yahuseph may pay back all the evil, but he comforts them with his words and tells them that he will provide for them and their little ones.

Time goes on and Yahuseph lives to be 110 and gets to see his great-grandchildren born. He tells his brothers that he is dying, but that YHWH will be with them, and to bring his bones from here. When he passes, they embalm him and he is placed in a coffin in Mitsrayim. 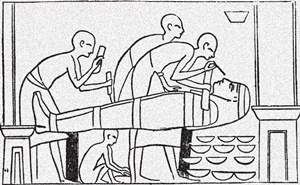 That’s it for the whole book of Bereshith (Genesis)! Thanks for reading with us!

Want to know what happens next?

Join us next week as we’ll start the second book, Shemoth (Exodus).