וַיְחִי Wa’Yechi literally means and he lived. Yaacob was well advanced in years, 147 to be exact, and he was aware that his life was coming to an end. Therefore, he called his son Yahuwseph to make arrangements, that his body would be buried in the cave of Machpelah, where Abraham, Sarah, Yitshaq, Rebekah and Leah were burried. Yaacob insisted that he not be buried in the land of Mitzrayim but in the land YaHuWaH swore to him. 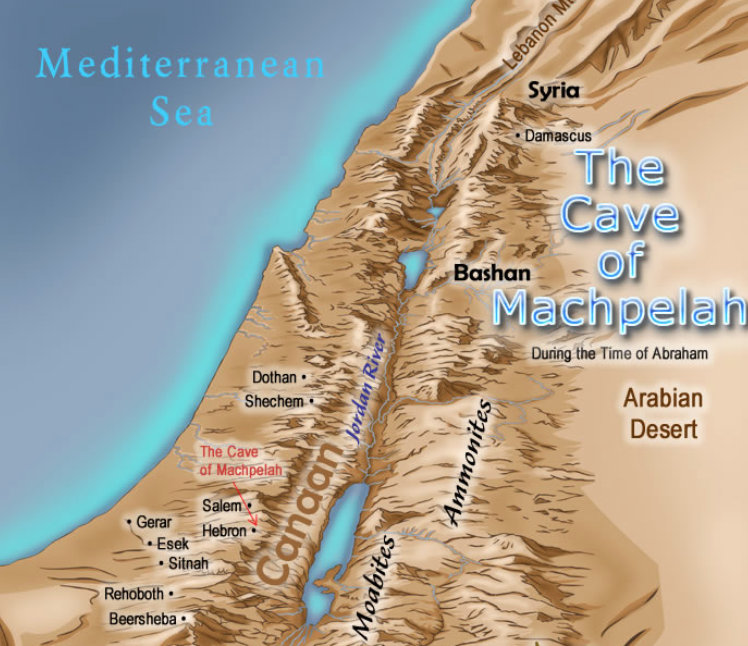 After seventeen years of being reunited with his father, Yahuwseph received news that Yaacob was ill and would soon die. Therefore, Yahuwseph brought his two son’s Ephraim and Menashsheh with him to visit Yaacob. Upon their arrival, Yaacob announced that Yahuwseph’s two sons would be counted as his own saying “as Reuben and Shimon they shall be mine.” Reuben and Shimon were Yaacob’s first two sons! Remember though that Yahuwseph is the firstborn, from Yaacob’s beloved Rachel. By Yaacob announcing that Yahuwseph’s sons would be as his own sons, he is giving Yahuwseph a double portion of berikah (blessing or gift).  By saying they will be as Reuben and Shimon, he is essentially elevating his grandsons to the status of the firstborn. This proclamation makes Ephraim and Menashsheh distinct tribes of Yashar’el (Yisrael/Israel). Yahuwseph then presented his sons bringing the firstborn Menashsheh to his Father’s right hand and his second born, Ephraim to his Father’s left hand. It was customary, as we have seen throughout the lives of the patriarchs, to בָּרַךְ barak (“bless” or spiritually gift) their son’s not only with possessions but with words, before their own death.  The conscious reality, the existence referred to as life, all that makes up the fabric of the creation was brought into existence with the power of words.  Therefore righteous men who walk in the will of the Creator, יהוה YaHuWaH have power and authority to proclaim his will in past, present and future tenses.  Ya’acob, who was renamed יִשְׂרָאֵל “Yisrael” by the מַלְאַךְ יְהוָֽה Malakh YaHuWaH, or “messenger YaHuWaH”, is a נָבִיא nabi or prophet, meaning he is one who relates the inspired word.  When Yaacob reached out to בָּרַךְ barak the children, he knowingly crossed his arms so that his right hand was not on the head of the firstborn Menashsheh but on the youngest, Ephraim. Yahuwseph did not understand why his Father would put his right hand on the youngest so therefore he protested but Yaacob responded “I know it, my son, I know it; he (Menashsheh) also shall become a people, and he also shall be great; but truly his younger brother shall be greater than he, and his seed shall become a multitude of nations.”

By the statement  וְזַרְעֹו יִהְיֶה מְלֹֽא־הַגֹּויִֽם “w’zaro yihyeh melo-hagoyim” or “his seed shall become a multitude of nations” we know Ephraim whose name means “Fruitfulness” would also birth מְלֹֽא־הַגֹּויִֽם Melo-HaGoyim or “the multitude of nations!” In fact the word often translated “Gentile” is גֹויִֽ Goy (Nation) in plural form גֹּויִֽם Goyim (Nations). The northern ten tribes of Yisrael (Israel) are often called Ephraim as a whole in the writings of the Prophets! The house of Ephraim or Northern ten tribes were many years later exiled from the Promised land by the Assyrians never to return. However we know the exiles will return and as YaHuWaH said through the mouth of the prophets “when I gather you I gather others besides you” because they will come with a great multitude of goyim or nations! Therefore, Yaacob baruch them saying, “By you Yisrael (Israel) will pronounce berikoth (blessings), saying, יְשִֽׂמְךָ אֱלֹהִים כְּאֶפְרַיִם וְכִמְנַשֶּׁה וַיָּשֶׂם yesimkha elohim k’efrayim w’khimnaseh (“Elohim make you as Ephraim and as Manasseh”). Notice he put Ephraim before Manasseh! The house of Yahuwdah, which includes BenYamin and Lewi, still pronounce this berikah over their children during Shabbat and other times.

Yahuwseph was the first-born or bechor of Yisrael (Yashar’al), through Rachel. therefore Yahuwseph was alotted an extra portion in the Promised Land. He inherited Yaacob’s hometown, Shechem near Hebron where Yahuwseph’s bones were buried much later. [Yahuwshuwa (Joshua) 24:32]). 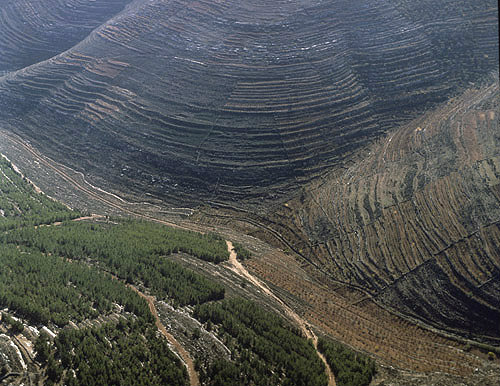 (Natural rock terraces can be seen from arial photo of Hebron, Israel)

After giving Yahuwseph the double portion, Yaacob called the rest of his sons to his bedside, and he baruch each one. Yaacob “nabu” or prophesied about each tribe in אַחֲרִית הַיָּמִֽים “acharit hayamim”, or the end of days.

Genesis 49:1 And Yaacob called to his sons, and said: “Gather yourselves together, that I may tell you that which shall befall you in the end of days.” 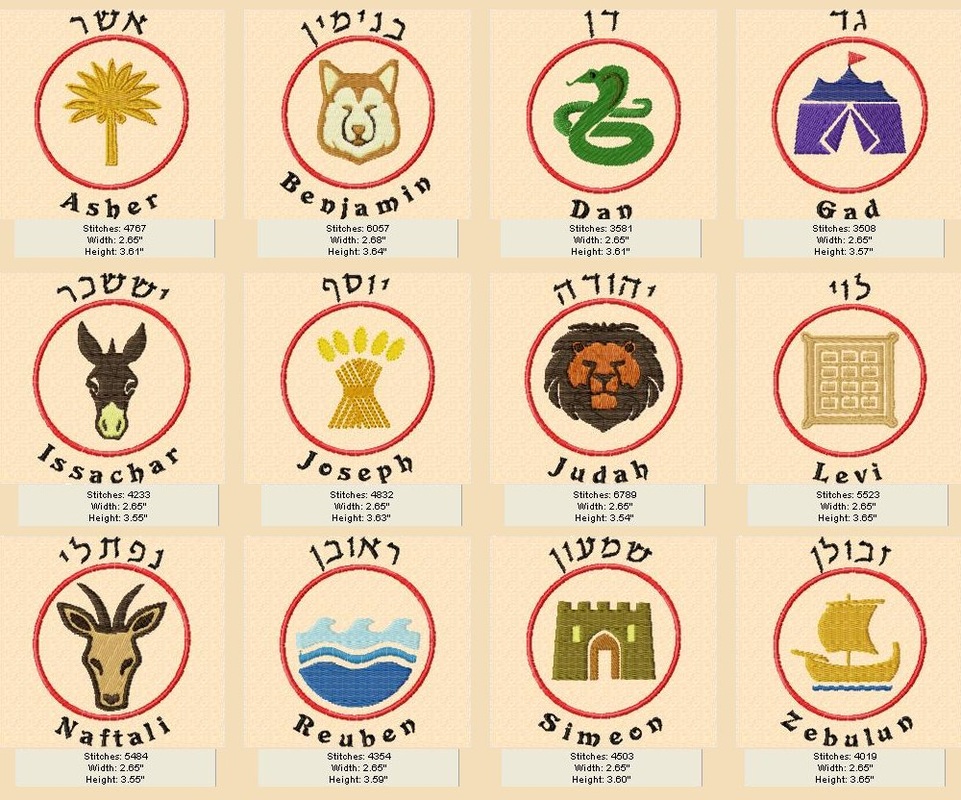 Reuben, you are my firstborn, my might and the first of my strength; the excellency of dignity, and the excellency of power.  Hasty as water, you shall not excel; because you went up and violated your father’s bed…

שִׁמְעֹֽון (Shimon) and לֵוִֽי (Lewi) are rebuked for the massacre of Shechem and selling Yahuwseph:

Shimon and Lewi are brothers; instruments of violence are their weapons… in their anger they slew a man, and in their selfwill they maimed a bull. Cursed be their anger, for it was fierce, and their wrath, for it was cruel; I will divide them in Yaacob, and scatter them in Israel.

יְהוּדָה (Yahuwdah) is exalted for saving Yahuwseph’s life and is promised sovereigns, governors and legislators of the 12 tribes, up to and including the Messiah, through the son’s of Dawid.

Yahuwdah is a lion’s whelp; from the prey, my son, you have risen…The scepter shall not depart from Yahuwdah, nor the legislator from between his feet, until Shiloh comes, and nations submit to him.

Yahuwdah’s portion in the Promised Land is filled with vineyards and prime pastureland: “His eyes are red with wine, and his teeth white with milk.” This is also a prophecy of Messiah who comes with red eyes due to trotting down the winepress of YaHuWaH’s wrath! Yahuwshuwa the Mashyach (Messiah) would come through this tribe!

Tehillim (Psalm) 78:67  Then He rejected the tent of Yoseph, And did not choose the tribe Ephrayim,68  But chose the tribe of Yahudah,Mount Tsiyon, which He loved.

זְבֻלֽוּן (Zebulun) shall dwell at the shore of the sea, and he shall be a haven for ships,” for his descendants will be seafaring merchants.

יִשָּׂשֶׂכָֽר (Yissachar) demonstrates perseverance as a beast of burden,

” Yissachar is a strong-boned ass couching down between the boundaries, bowing his shoulder to the load…”

גָּד (Gad) shall produce the victorious warriors of Yashar’al (Israel);

אָשֵֽׁר (Asher) is baruch with a bounty of olive oil that will be grown and produced in his lands;

“נַפְתָּלִֽי (Naphtali) is a deer running free, who delivers words of beauty.”

Yahuwseph is an offshoot of a fruit-bearing tree, an offshoot of a fruit-bearing tree by a fountain, his branches run over a wall. And the archers have bitterly grieved him, shot at him and hated him. But his bow remained in strength, and the arms of his hands were made strong by the hands of the Mighty One of Yaacob – from there is the Shepherd, the Stone of Yashar’al (Israel)!

From the Mighty One of Yaacob comes the Shepherd, the Stone of Yisrael! Though the lineage of Mashyach must come through Dawid through the tribe of Yahuwdah, Yahuwshuwa is a portrait of Yahuwseph! Yahuwseph was the rejected corner stone, he was the shepherd of his people! The Messiah must in like manner be betrayed and thrown into the pit or literally the grave. He must reveal himself to his brothers, the twelve tribes of Yisrael!

בִנְיָמִֽין (BenYamin) is likened to “a ravenous wolf; in the morning he shall devour the prey, and at night he shall divide the spoil.”

All these are the twelve tribes of Yashar’al ( Israel); and this is that which their father spoke to them, and baruch them; every one according to his berikah he baruch them…

After Yaacob pronounces the berikoth (blessings) over his sons he commanded them yet again to bury him in Machpelah. After giving these instructions he raised his feet into bed and died. Yahuwseph fell on his Father’s face and wept and then had the Mitsarite (Egyptian) physicians embalm his Father. The Mitsirites mourned Yaacob’s death for seventy days. Pharaoh granted permission for Yahuwseph to depart in order to bury his deceased father. With his brothers, and dignitaries of Mitsrayimim he forms a funeral procession that journeys to the land of Canaan to bury Yaacob at Hebron. After the funeral Yahuwseph’s brothers were afraid that he would avenge the wickedness of their sins which they committed against him. Yahuwseph assured them that he would support them and their families and that he was not in place of YaHuWaH to judge them. He knew that YaHuWaH chose them to be the royal lineage of the 12 tribes of Yashar’al! Before Yahuwseph died he made his family promise to bring his bones to the Promised land saying “Elohim shall surely visit you.”  At age 110, he also died and was embalmed and placed in a coffin.

The berikoth (“blessings” or favor) of Abraham, Yitshaq and Israel are promised to those who are obedient to YaHuWaH’s word!  From YaHuWaH comes the Stone, The Shepherd, the one called Siloh, the chosen seed, who is the firstborn of YaHuWaH, YaHuWshuwa Ha Mashyach!  Through the message of Messiah we will see the restoration of the twelve tribes of Israel and the fullness of the nations.