Meaning: ‘When you lift up’

This week’s Torah Portion is called Ki Tisa (כי תשא), meaning “when you lift up.” This reading is about the golden calf, the tablets with the 10 commands and Moshe’s encounter with YHWH.

Chapter 30 (cont.):  YHWH speaks to Moshe and tells him that when he takes a census to register the children of Yashra’el, then each one was to give an atonement for his life so that no plague would come upon them. A half-shekel was required tor each one of them as a contribution to YHWH, regardless of how rich or poor they were. The silver collected would then be given to the service of the tent of appointment (tent of meeting). 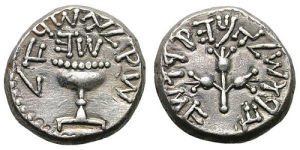 Fun Fact: The first known usage of a shekel is from Mesopotamia around 3000 BC. Initially, it referred to ‘weight’. For example, a shekel of barley.

YHWH then goes on to tell Moshe how to make the basin of bronze between the Mishkan and the bronze alter, for washing. Aharon and his sons (the Kohanim, or priests), were to wash their hands and feet before they could enter or they would pass away. Then YHWH shared with Moshe the recipe for making a very special and set-apart anointing oil, to be used for anointing the tent of meeting, the ark, the table and all its utensils, the lampstand and its utensils, the alter of incense, the alter of the burnt offering with its utensils, and the basin and its stand. All were to be set-apart, and whatever touched them would be set-apart too. YHWH even gives Moshe the recipe for the set-apart incense as well.

Chapter 31: After this, YHWH assured Moshe that all the craftsmanship and materials needed would be provided by the people that had it in their hearts and minds, and that they would do as he had said. But before he finished speaking to Moshe, he reminded him that the children of Yashra’el were to guard his Sabbaths by all means, as a sign between YHWH and the people, throughout all their generations. Six days work is to done, and on the seventh is a Sabbath of rest. For in six days YHWH made the shamayim (heavens) and the earth, and on the 7th day he rested. Then YHWH gave Moshe the two stone tablets of the Witness (commands), written with the finger of Elohim.

Chapter 32: And when the people noticed that Moshe was gone for a long time (the 40 days and 40 nights), they gathered together and told Aharon to make them a mighty one! Aharon then told them to take off all their golden earrings and he made them a golden calf. The people praised it, calling it their mighty one, and even it was the one that brought them out of Mitsrayim (Egypt)! YHWH told Moshe, “Go, get down!” The people had already starting doing bad things, by bowing down to the golden calf and offering offerings to it. Moshe begged for YHWH to forgive them, as he was very angry with the people! So YHWH relented from the evil he said he would do to the people, and Moshe came down the mountain with the tablets in his hands.

And Yahuwshuwa (son of Nun) heard the noise of the people as they shouted and said to Moshe, “A noise of battle in the camp!” But Moshe said, it is the sound of singing. And as soon as Moshe came near the camp, he saw the calf and the dancing, and he was really mad! He threw the tablets out of his hands and broke them at the foot of the mountain. He took the calf they made and burned it with fire. After that, he ground it into powder, and scattered it on the water for the children of Yashra’el to drink.

Fun Fact: Surprisingly, gold is edible. It’s considered a ‘Natural Food Additive’, and is even used today in a few specialty food and beverage items.

The people had let loose and so Moshe stood in the entrance of the camp and said, “Who is for YHWH? Come to me.” And all the sons of Lewi came to him. And he said, “Each one put his sword on his side, pass over to and fro from gate to gate in the camp”. And about 3,000 men of the people fell that day because of the evil that they had done. On the next day Moshe said to the people, “You have sinned a great sin. And now I am going up to YHWH” (to beg YHWH for forgiveness of their great sin). Then YHWH told Moshe, “See, My Messenger goes before you. And in the day of My visitation I shall visit their sin upon them.” And YHWH plagued the people because of the calf that they had made.

Chapter 33: And YHWH told Moshe to lead the people, but that he would not go up in their midst because they were are a stiff-necked people, and if he did, he would probably have to consume them. When the people heard this, they mourned. And Moshe took his tent and pitched it far from the camp, and called it the Tent of Appointment.

Fun Fact: The Tent of Appointment (also known as the Tent of Meeting) was a temporary solution for Moshe’s meeting with YHWH until the actual tabernacle was constructed.

And whenever Moshe went to the Tent, all the people rose and watched Moshe until he entered. And when Moshe would go in, a column of cloud would descend, and all the people bowed themselves, at the door of his own tent. And so YHWH would speak to Moshe face to face, as a man speaks to his friend, and Moshe pleaded with YHWH to still bring his presence, to distinguish them from all the rest of the world. And YHWH showed Moshe favor and agreed. And though no one could see YHWH’s face and live, YHWH agreed to let Moshe see his presence, and protect him with his hand until he passed by, so that he could just see the back of his presence and still live.

Chapter 34: And YHWH told Moshe to cut two tablets of stone, just like the first ones, and to be ready in the morning and keep everyone (including animals) away from the mountain. So in the morning, Moshe brought the two tablets and stayed there again for 40 days and 40 nights, not eating or drinking anything. And YHWH gave Moshe directions as to what the people were suppose to do when inhabiting the land, and to keep the festivals. When they were done, Moshe came down the mountain, and his brother Aharon and all the children of Yashra’el looked at him and saw that his skin was shining! They were afraid to come near him. But Moshe called out to them, and Aharon and all the rulers of the congregation came to him, and Moshe spoke to them. And when Moshe ended speaking with them, he would cover his face with a veil until he would go to speak with YHWH and then cover his face again afterwards.

Want to know more? Join us next time as we read more about the Exodus!