Hebrew Word/Phrase of the Week: Chukat

The Torah Portion this week is called chukat (חוקת), meaning “statue”. This time we read about the waters from the rock, Aharon and Miryam’s passing away, and the journey closer to the promised land.

Chapter 19:  YHWH speaks to Moshe and tells him what the children of Yashra’el are to do when they are unclean because of someone passing away. A special red heifer would be taken to the priest (Kohen) and items such as cedar wood, and hyssop are added into the fire with the heifer for cleasing of the person. After 7 days, they can be clean again.

Fun Fact: So this is how it works. For the person that’s unclean, they take some of the ashes from the mix mentioned into a vessel and add running water. Then a clean man takes hyssop and dips it into the mixture to sprinkle the unclean people and things. This is done on the 3rd and 7th day. Then on the 7th day they would clean their clothes and bathe so they could be clean again at evening.

Chapter 20: Now going back to where we left off last week, Miryam passes away and now there is no water for the people to drink. The people grumble to Moshe and Aharon again, saying this time, “If only we had died when our brothers died before YHWH!”. And Moshe and Aharon both went to the door of the Tent of Meeting, and fell on their faces.

YHWH’s esteem appears to them and YHWH instructs Moshe to speak to the rock before the people’s eyes and bring water for them out of the rock and give it the congregation and their livestock to drink. Moshe takes the rod from before YHWH and tells the assembly, “Hear now, you rebels shall we bring water for you out of this rock?” Then Moshe strikes the rock twice with his rod! Lots of water comes out, and the congregation and their livestock drinks. But is this how YHWH told Moshe to do it? 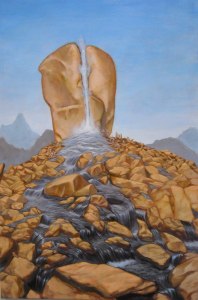 So YHWH speaks and Moshe and Aharon saying, “Because you did not believe Me, to set Me apart in the eyes of the children of Yashra’el, therefore you do not bring this assembly into the land which I have given them.”

Next the group runs into trouble when Moshe sends messengers to the sovereign of Edom, asking permission to pass through their land, as they are very close to their border in Qadesh. The king of Edom in short tells them that if they pass through, they’ll come against them with the sword! The people respond by trying to insure them that they wouldn’t bother anyone by drinking any of their water or saying a word, but would travel by foot to pass through. The king again refuses to let them pass through his border and they even came out against them with many men. So the children of Yashra’el turned away from there and came to Mount Hor.

Then comes more bad news. YHWH speaks to Moshe and Aharon and says Aharon is to pass away because of Moshe and Aharon’s rebellion at the rock. YHWH tells them to take Aharon and El’azar his son, and bring them up to Mount Hor, “to strip Aharon of his garments and put them on El’azar his son, for Aharon is to be gathered to his people and die there.” And so Moshe does as commanded and Aharon passed away there on the top of the mountain. And Moshe and El’azar came down from the mountain, and when all the congregation saw that Aharon was dead, all the house of Yashra’el wept for Aharon, 30 days.

Chapter 21: Then the king of Arad the Kena’anite, heard that Yashra’el was coming on the way to Atharim, and he fought against Yashra’el and took some of them captive! And Yashra’el prayed to YHWH that if he would deliver them into their hand, they would get rid of all their cities. So YHWH listened to them and gave up the Kena’anites- and the people of Yashra’el put them and their cities under the ban.

And the children of Yashra’el left Mount Hor to go around the land of Edom, and the people grew impatient because of the route they had to take around. They grumbled and spoke against YHWH, even saying that they hated the light bread that YHWH had been giving them! So YHWH sent fiery serpents and they bit the people, and many of the people of Yashra’el passed away. Then the people begged Moshe to pray for them and he prayed on behalf of the people. And YHWH told Moshe “to make a fiery serpent, and set it on a pole. And it shall be that everyone who is bitten, when he looks at it, shall live.”

So Moshe made a bronze serpent, and if a serpent had bitten anyone, when he looked at the bronze serpent, he lived. Next the people journey on, and the rest of this chapter lists all the places the children of Yashra’el camped while out in the wilderness, and all the cities that the people conquered and destroyed.

Fun Fact: It sounds harsh that YHWH would allow all the people in the list of places to be destroyed, but the people of Mo’ab were also known to sacrifice their children to their pagan mighty ones and YHWH hates that!

Chapter 22: And the children of Yashra’el set out to journey on and camped in the desert plains of Mo’ab beyond the Yarden of Yeriho (Jericho).