“And it shall be, because you hear these right-rulings, and shall guard and do them, that YaHuWaH your Elohim shall guard with you the covenant and the kindness which He swore to your fathers Debarim (Deuteronomy) 7:12

This Torah Portion is entitled עקב Eikev which is translated “because.” W’hayah, and it shall be עקב eikebh because you shema (hear and do) these mishpatim, judgments and shall shamar meaning to guard to do them that YaHuWaH your Elohim shall shamar, guard and watch over the brit or covenant and chesed meaning loving commitment. This one passage is key to understanding the Berikoth (“blessings”) of YaHuWaH. Indeed the covenant of YaHuWaH is conditional based solely upon obedience. If you guard the covenant to do it then YaHuWaH will guard his word in your life to perform it. Sounds easy enough, though the history of ancient Yisrael (Yashar’al) proves it to be a bit more difficult due to the fallen state in which mankind is in. Each time we perform a mitzwah or “commandment” we are literally storing for ourselves treasures in shamayim (heaven/space). The word עקב Eikebh comes from the word aqab, which means heel. The idea here is, not only will YaHuWaH do this “because” (eikev) you hear and guard his word but because even the heel of your feet will be directed at guarding and walking in his word.

Further Mosheh (Mushah) stated that YaHuWaH shall ahab (love) his people and increase them and barak (“bless) the fruit of their wombs and their land. He promised that their crops shall increase and their cattle. Even more Mosheh affirmed that Yisrael (Yashar’al) is above all nations of the earth. He states that none of them will be barren, and that none of the diseases of the nations shall come upon them if they guard the Word of YaHuWaH. The seven nations which Yisrael (Yashar’al) would face in the land of Kena’an (Canaan) were far greater and more numerous than they. However Mosheh warns them not fear:

Debarim (Deuteronomy) 7:21“Do not be afraid of them, for YaHuWaH your Elohim, the great and awesome El, is in your midst.

They are warned against the idols and abomination of the land and commanded to destroy all idols in the land and not to use the gold and silver found in them for anything “lest you be snared by it.” Any material that comes from an idol is an abomination (toe’ebah and is not allowed in the home.

Debarim (Deuteronomy) 7:26“And do not bring an abomination into your house, lest you be accursed like it. Utterly loathe it and utterly hate it, for it is accursed.

The word accursed in this passage charem, literally means, “it is purposed for utter destruction.” We are commanded to “utterly loathe it” or taeb tetaebenu, which literally repeats the word taeb for loathe twice. This is due to to Hebrew expression, often times a word is repeated for emphasis. In this we know that we are to loath, detest and abominate with all that we are the idols of the nations. Idols are a snare to bring one down to complete destruction. Now imagine what you as an individual may be allowing in your own home that is abominable to YaHuWaH via your television, computer, books, magazines and the like. We must not allow the abomination in our home for it marks our home for utter destruction.

Mosheh (Mushah) again commands “shamar” (guard, and watch over) every command of YaHuWaH so that the children of Yisra’el (Yashar’al) will possess the land and increase. He reiterates the importance of remembering the experience of the wilderness, how YaHuWaH tried them with hunger to humble them so that they may be fed with manna of shamayim (space/heaven) to know that “man does not live off bread alone, but everyone word which proceeds from the mouth of YaHuWaH.” Interestingly enough this is the passage Yahuwshuwa HaMashyach used while he was on his forty day fast in the wilderness to rebuke shatan.

When a loving Father disciplines his son, truly the Father feels more pain in his heart than the child feels in his flesh. So too YaHuWaH loves his children with a great compassion and feels the pain of a loving Father when he must discipline them.

YaHuWaH is about to let his children in the Promised Land, a land of water and wells, that is famous for shivat ha-minim or seven species, referring to the seven major crops of the land which are barley, wheat, figs, grapes, pomegranates, olives and dates.  As long as Yisrael will obey YaHuWaH’s voice the land will bring forth its increase and YaHuWaH will protect them. Mosheh (Mushah) warns them to be on guard never to forget YaHuWaH when they enter the land and build nice houses and increase in crops and livestock. Rather we are commanded that when we eat and are satisfied we must remember YaHuWaH our Elohim.

Debarim (Deuteronomy) 8:18“But you shall remember YaHuWaH your Elohim, for it is He who gives you power to get wealth, in order to establish His covenant which He swore to your fathers, as it is today.19“And it shall be, if you by any means forget YaHuWaH your Elohim, and follow other mighty ones, and serve them and bow yourself to them, I have warned you this day that you shall certainly perish.20 “Like the nations which YaHuWaH is destroying before you, so you are to perish, because you did not obey the voice of YaHuWaH your Elohim.

In the Promised Land are the sons of Anaq who are gigantic human hybrids that were created by the mixing of Benei Elohim and human females. This can all be found in Beresheeth, Genesis 6. These giants were fearsome, mighty, numerous and practiced magic and sorcery. Mosheh warns his people that YaHuWaH is going to destroy them because of all the abominations that they do. Further Mosheh warns his people against pride stating:

Debarim (Deuteronomy) 8:4 “Do not think in your heart, after YaHuWaH your Elohim has driven them out before you, saying, ‘Because of my righteousness YaHuWaH has brought me in to possess this land.’ But it is because of the wrong of these nations that YaHuWaH is driving them out from before you.5 “It is not because of your righteousness or the uprightness of your heart that you go in to possess their land, but because of the wrong of these nations that YaHuWaH your Elohim drives them out from before you, in order to establish the word which YaHuWaH swore to your fathers, to Abraham, to Yitshaq, and to Ya’aqob.6“And you shall know that YaHuWaH your Elohim is not giving you this good land to possess because of your righteousness, for you are a stiff-necked people.

Yisrael is commanded never to forget how they have provoked YaHuWaH to wrath for the past forty years while wondering the desert. Even at Horeb they made YaHuWaH angry when Mosheh (Mushah) went up the mountain to retrieve the two tablets bearing the ten words of the Covenant. Mosheh (Mushah) was on the mountain without food or water for forty days in the presence of almighty YaHuWaH, the life source. However as YaHuWaH gave Mosheh (Mushah) the tablets the children of Yisrael had fallen into idol worship by creating a golden calf.

Debarim (Deuteronomy) 8:13 “And YaHuWaH spoke to me, saying, ‘I have seen this people, and look, they are a stiff- necked people.14 ‘Leave Me alone, so that I destroy them and blot out their name from under the heavens, and make of you a nation stronger and greater than they.’

Mosheh (Mushah) related how he came down the mountain while it was still on fire with the tablets in his hands. When he saw that in fact the children of Yisrael had made a golden calf he threw them to the ground destroying them. After destroying the calf and grinding into powder, it was dumped into the stream that came down the mountain. To make his case against Yisrael clear Mosheh began to relate all the recent sins which his people had committed against YaHuWaH. At Taberah the people complained for a lack of meat. At Massah they bickered for a lack of watter. At Kivrot Hatta’awah they lusted for meat. At Kadesh Barnea they rebelled against YaHuWaH by believing the evil report of the land brought by 10 of the 12 spies, which forced the nation to wonder the desert for 40 long years. Mosheh concluded by saying “you have been rebellious against YaHuWaH from the day that I knew you.”

After the sin of the Golden Calf, again Mosheh (Mushah) began to fast so that the he could again go up the mountain to intercede for the people in hopes of renewing the covenant. This time Mosheh (Mushah) was required to cut out the tablets of sapphire himself instead of YaHuWaH. YaHuWaH renewed the covenant by writing the former words again upon the new set of tablets. The Torah teaches us the concept of the Brit Chadasha (renewed covenant) in the foreshadowing events, which took place as Horeb. We see that Brit Chadasha or renewed covenant comes through the chesed or loving compassion of YaHuWaH despite the fact that his original covenant had been broken. 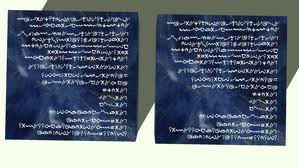 Yirat YaHuWaH or the fear of YaHuWaH is the beginning of chokmah or as it is called in English “wisdom”, this can be found all throughout the scriptures especially in the Proverbs. This literally means we should live in a state of being that is actively and consciously aware of the presence of YaHuWaH who sees and hears all.

“See, the heavens and the heaven of heavens belong to YaHuWaH your Elohim, also the earth with all that is in it.”

The word which is translated heaven literally means “space” as we know it today, this passage tells us that the universe is YaHuWaH’s but that there is a space beyond the universe.

Further we are commanded to be circumcised in our heart, which refers to cutting off the foreskin of wickedness, greed, and all forms of sin and abomination. If we allow our hearts to be circumcised and guard YaHuWaH’s words and keep his judgments and statutes then he will give us the rain in it’s season both the former rain and latter rain with the grain, wine and oil with grass in the fields for the animals. This Torah Portion concludes with what is considered to be the second portion of the Shema found in Debarim (Deuteronomy) 11:13-21 .

Debarim (Deuteronomy) 11: 18 ‘And you shall lay up these Words of Mine in your heart and in your being, and shall bind them as a sign on your hand, and they shall be as frontlets between your eyes.19 ‘And you shall teach them to your children, speaking of them when you sit in your house, and when you walk by the way, and when you lie down, and when you rise up,20and shall write them on the doorposts of your house and on your gates,21 so that your days and the days of your children are increased on the soil of which YaHuWaH swore to your fathers to give them, as the days of the heavens on the earth.

Again we see the reiteration that we read in the previous Torah Portion, that the Torah shall be a sign on your hand and as frontlets between your eyes. If only people were as concerned about having the sign and seal of YaHuWaH as they are being obsessed with the idea of the mark of the beast. If you are signed and sealed by YaHuWaH there is no room for marks from any beast system whether it be commercial, political or religious.