Hebrew Word/Phrase of the Week: Vayakhel

This week’s Torah Portion is called Vayakhel (ויקהל), which means “and he assembled.“ Moshe assembles the people, and together they make the items needed for the Mishkan (the Dwelling Place of YHWH).

Chapter 35: Moshe gathers together all the children of Yashra’el and reminds them of the Shabbat and of YHWH’s commands. And do you remember from a few lessons ago (Terumah, Torah Portion 2.7), how YHWH gave Moshe the instructions on how to make all the items inside the special meeting place? Well now it was time to make those things happen! Moshe tells them to take up the contribution of YHWH (that we read about last week) for the service in the set-apart place, and everyone whose heart moved him, came and brought all the items needed for the work of the Tent of Meeting and for all its service.

Fun Fact: Moshe goes up Mount Sinai for a total of 8 times in all. Pretty extravagant for a man in his 80s.

Chapter 36: And so Moshe called Betsal’el and Oholiab, and every wise-hearted man in whose heart YHWH had given wisdom, to come and do the work. And Moshe gave them all the contribution items for making the set-apart place. But even when they had enough, the people still brought gifts every morning. So the craftsmen spoke to Moshe, and then Moshe told the people not to make any more things for the set-apart place, because they already had more than enough!

Chapter 37: And so the work continues on, and Betsal’el made the ark of acacia wood and overlaid it with clean gold inside and on the outside. He made all the items needed to lift the ark as instructed, and made the two kerubim on top of the ark from beaten gold. And the kerubim were made to spread out their wings above and cover the lid of atonement. And he went on to make the table and it’s items of acacia wood, and overlaid it with clean gold. He also made the utensils, its dishes, its cups, its bowls, and its jars for pouring of clean gold. And then he made the lampstand of clean gold too. Six branches of the lampstand came out of its sides, and all were decorated with almond flowers and blossoms. 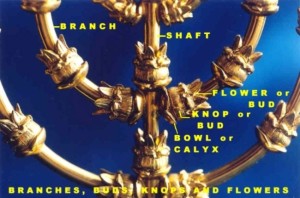 He also made the incense altar of acacia wood and he overlaid that with gold as well. Betsal’el even made the set-apart anointing oil and the clean incense of sweet spices, just as a perfumer would.

Chapter 38: But there was still more left to do. Betsal’el made the altar of the burnt offering from acacia wood and covered it with bronze. Then there was all the utensils for the altar, and all its items made of bronze too. Next, he moved on to the courtyard. The screens of the courtyard were of fine woven linen, and there were columns and lots of detail work to be done. The sockets for the columns were of bronze, the hooks of the columns, their tops and their bands were of silver. The covering for the gate of the courtyard was beautifully made of blue and purple and scarlet material, and of fine woven linen. All the pegs of the Dwelling Place, and of the courtyard all around, were made with bronze.