Hebrew Word/Phrase of the Week: Shemoth

This week’s Torah Portion is called Shemoth (שמות), meaning, “Names”.  A baby is born during a time that it’s dangerous to be a Hebrew baby boy, and the time comes that YHWH remembers his covenant and is preparing the way.

Chapter 1: In the previous book (Bereshith) we left off with Yahuseph (Joseph’s) passing away. Eventually, all the brothers and everyone pass away from that generation. Yashra’el’s children are fruitful and multiply very greatly. They become strong and the land is filled with them. But then a new sovereign of Mitsrayim arises and he doesn’t know about Yahuseph. In fact, he sees the people of Yashra’el (Ya’acob) as a big threat and wants to do away with them! He tells the midwives to get rid of any baby boys the Hebrew women have.

Thankfully, the midwives fear YHWH and don’t do as they are commanded. They tell the new Pharaoh that the Hebrew women have the babies before they even get there. Of course this wasn’t what really happened, but it kept the baby boys safe at first and YHWH barak (blesses) the midwives for fearing him. However, Pharaoh then commands all his people “to throw every (Hebrew) son into the river”!

Chapter 2: But there was one couple, both from the tribe of Lewi (Levi) that have a lovely baby boy and they keep him hidden for 3 months. When they can no longer hide from anymore, his mother makes an ark of wicker, coated with tar and pitch and puts the baby boy inside. She lays it in the reeds by the edge of the river and his sister stands at a distance, to know what will happen to him. 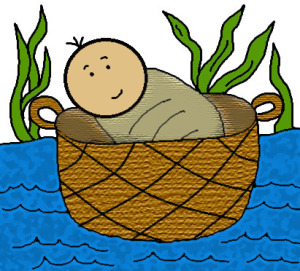 Then the daughter of Pharaoh came down to wash in the river, and sees the ark in the reeds! She sends her female servant to get it, and when pharaoh’s daughter opens it, she sees the baby and he weeps. So she has compassion on him and says, “This is one of the children of the Hebrews”.

Fun Fact: Pharaoh’s daughter tells the girl’s mother to take the boy child away and nurse him for her, and she would pay her to take care of him! So she got to keep her baby boy for longer and was paid at the same time!

When the child is weaned, the mother returns him back to Pharaoh’s daughter and he becomes her son, and she names him Moshe (Musha, also known as Mosheh, or Moses), “Because I have drawn him out of the water”.

When Moshe is grown, he goes out to see his brothers and saw their burdens. And he sees a Mitsrian striking a Hebrew, one of his brothers! When Moshe doesn’t see anyone, he strikes the Mitsrite and later finds out that people knew about it. Pharaoh finds out and wants to get rid of Moshe, but he runs away and dwells in the land of Midyan.

Fun Fact: When Moshe flees from Pharaoh to the land of Midyan, he sits down by a well and the priest of Midyan’s 7 daughters come to water their flock, but shepherds drove them away. Then Moshe stands up and comes to their rescue!

Their father asks Moshe to dwell with him and he gives his daughter Tsipporah to him as a wife, and they have a son. After some time, the people that wanted to get rid of Moshe passed away and the people of YHWH cried out to Elohim because of their heavy burdens. YHWH heard them and remembered his covenant with Abraham, Yitshaq and Ya’acob.

Chapter 3: Then one day, as Moshe is taking care of his father-in-laws flocks, he shepherds them to the back of the wilderness and comes to the mountain of Elohim in Horeb. There, the messenger of YHWH appeared to Moshe in a flame of fire from the midst of a bush. When Moshe saw it, he said, “Let me turn aside now, and see this great sight, why the bush does not burn”. Then YHWH spoke to him and told Moshe how he has seen his people’s sorrow and am sending him to Pharaoh, to let his people go.

Chapter 4: And Moshe asked, what if they don’t believe me? Then YHWH showed Moshe the signs that he should show Pharaoh; turning the rod into a snake, the sick hand and the blood from water. Then Moshe said that he wasn’t a great speaker, and that he was slow of speech and slow of tongue. YHWH asked, “Who has made man’s mouth? Or who makes dumb, or deaf, or seeing, or blind? Is it not I, YHWH?” And YHWH told Moshe that he would teach him what to say, but Moshe asked that he would send someone else. YHWH was angry by this, and told Moshe that his brother Aaron was coming, and that he should put the words in his mouth, and Aaron would do the speaking for Moshe.

So afterwards, Moshe takes his wife and his sons on a donkey and returns to Mitsrayim with the rod of Elohim in his hand. His brother Aaron meets him and he tells his brother about the signs, and together, they tell the children of Yashra’el and they believe.

Fun Fact: YHWH was still angered with Moshe, and decided to get rid of him in the wilderness! It was by an act of his wife, Tsipporah, that made YHWH decide to let him go.

Chapter 5: When they go to Pharaoh, they ask him to let the Hebrews go, so that they celebrate a festival to YHWH in the wilderness. But Pharaoh says, who is YHWH? He won’t let them go. In fact, that same day, Pharaoh decides that the Hebrew slaves must not have enough to do! He orders them to now find their own straw to make bricks, and that they better make the same amount as they did before when they were given straw. When the people meet Moshe outside, they are angry because they are in more trouble and their labors have become too hard!

Want to know what happens next?

Join us next week as we read on!