Hebrew Word/Phrase of the Week: Shelach

The Torah Portion this week is called Shelach (שלח), meaning “Send out”. Moshe sends out spies to review the land of milk and honey, and the children of Yashra’el are punished to wonder the wilderness for 40 years.

Chapter 13: The children of Yashra’el have moved camp according to YHWH’s lead, and now they are in the wilderness of Paran, getting close to the Promised Land. To give them an idea of what to expect and what troubles they may run into, Moshe sends a leader from each of the 12 tribes to spy out the land YHWH promised to give them. Moshe tells them to bring back the news and find out matters such as what the land is like, what the people are like and how many there are. Are they strong? Are they weak? He also instructs them to bring back some of the fruits they find, so they will know what type of fruits to expect from there. Then Moshe tells them the path they should take to sneak in, and the men are off.

When they arrive, they see the descendents of Anaq (the giants) are there. And they come to an area where the men cut down a branch with a cluster of grapes that took two men to carry it on a pole! Also of the pomegranates and figs. After 40 days of investigating the land, they returned to the camp and shared the bad news with Moshe, Aharon and all the congregation.

Fun Fact: The children of Yashra’el weren’t the only people that had to worry about the Anaq people. The Egyptian Execration texts (list of all of Pharaoh’s enemies) of the Middle Kingdom (2055-1650 BC) mention a list of political enemies in Canaan, and among this list are a group called the “ly Anaq” or people of Anaq.

The men who went as spies told the congregation that the people who dwelled there are strong and the cities were walled and very great. But Kaleb (Leader for the Tribe of Yahudah- that was sent as one of the spies) silenced the people and told them they could overcome it. Then the men who went with him scared the people by telling them that those people were stronger than them, and that the Anaq people (also called Nephilim, or giants) were men of great size! In such, that the men “were like grasshoppers in our own eyes, and so we were in their eyes”.

Chapter 14: And all the people lifted up their voices and wept and grumbled, saying “If only we had died in the land of Mitsrayim! Or if only we had died in this wilderness!”. They worried that they would fall by the sword and their wives and little ones would become prey! So trusting in themselves, they appointed a leader to take them back to Mitsrayim! Two of the men who were sent as spies: Yahuwshuwa (Yahushua) Son of Nun (Leader for the Tribe of Ephrayim) and Kaleb (mentioned earlier) were upset and tried to reason with the people. They reassured the people that the land REALLY was a great land and that it was flowing with milk and honey, and that the people shouldn’t rebel against YHWH or fear the giants because YHWH was with them!

And how did the people react to Yahuwshuwa son of Nun and Kaleb? The people said, stone them!!! Angry, the esteem of YHWH appeared in the Tent of Meeting before all the children of Yisra’el and YHWH spoke to Moshe. “How long shall I be scorned by these people? And how long shall I not be trusted by them, with all the signs which I have done in their midst?”. YHWH thought to dis-inherit the people and smite them with a plague, and make from Moshe a greater and mightier people. But Moshe prayed for the forgiveness of the peoples’ sins and so YHWH forgave the people. However, because the people disobeyed YHWH and tried him 10 times in the wilderness, even after all the signs and wonders he showed them in Mitsrayim, he swore that all the generation that scorned and grumbled against him would not go to the Promised Land, but would pass away in the wilderness. As harsh as this punishment was, it was actually what the people had asked for when they said, “Or if only we had died in this wilderness!”.

So except for Yahuwshuwa son of Nun and Kaleb (because they were not a part of the grumblers and tried to lead the people not to rebel against YHWH), all the leaders that went as spies and caused the people to grumble, passed away before YHWH from a plague. And Moshe told the people YHWH’s words and what his punishment was for them, that all the people from 20 years old and above were to pass away in the wilderness. But for their little ones, that they said would become a prey, he said that they would be the ones to go to the land that the people rejected, and would be wanderers in the wilderness for 40 years. 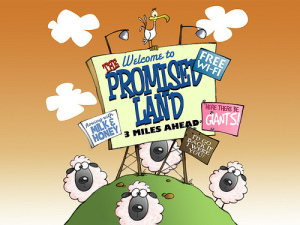 Then the people mourned greatly! Realizing they had made the wrong decision, they said, “See, we have indeed sinned, but we shall go up to the place which YHWH had spoken of!” But of course Moshe warns them not to go! He tells the people not to disobey YHWH’s command. And why go now, since YHWH will not be with you, and you will fall by the sword? And people continued to go there anyway, but Moshe and the ark of the covenant did not go with them. So what happens? The people that dwelt in that land defeated and smite them.

Chapter 15: After this, YHWH lets the people know how they should offer offerings to him when they come into the Promised Land, and tells them they should wear tzittzits to remind them to be set-apart.

Fun Fact: Tzitziyot (more than one tzitzit) are fringes worn on the corners of their garment. It has a blue cord in it and when you see it, it should be a reminder to remember all the commands of YHWH, and not to search after your own heart and your own eyes, but to be set-apart.

Next, a man is caught gathering wood on the Shabbat and YHWH instructs that the people stone him. This goes to show the people how serious YHWH is about keeping his instructions and teaches them how they are to conducts themselves when they enter the land.