Hebrew Word/Phrase of the Week: Pekudei

This week’s Torah Portion is called Pekudei (פקודי), which means “Accounts.” This  continues where we left off with the building of all the items needed for the Mishkan (The Dwelling Place of YHWH).

Chapter 38: And so Betsal’el son of Uri, son of Hur, of the tribe of Yahudah, made all that YHWH commanded Moshe. And Oholiab, the son of Ahisamak, of the tribe of Dan, was an engraver and designer. He embroidered the blue and purple and scarlet material, and the fine linen.

Fun Fact: Remember the half-shekel contribution we read about previously (in Ki Tisa- Torah Portion 2.9)? This was collected from every man twenty years old and above. That was from 603,550 men.

Chapter 39: And they made the set-apart outfit for Aharon, as YHWH had commanded Moshe. The shoulder garment was made of gold, blue, purple and scarlet material, and also of fine woven linen.

Fun Fact: They beat out sheets of gold and cut it into threads, to work it in with the blue and purple and scarlet material!

Fun Fact: The opening of the robe was in the middle, like the opening in a scaled armor, with binding all around the opening so that it would not tear.

Aharon’s hem of his robe was also decorated with pomegranates of blue and purple and scarlet material. And with it were bells of clean gold between the pomegranates. Next they made the long shirt, the turban and its ornaments, the shorts and the girdle of fine linen for Aharon and his sons. But for Aharon they engraved a signet: SET-APART TO YHWH, and attached it on the turban. And after all this hard work was done, the work for the Dwelling Place was completed, and Moshe baruk (blessed) them.

Chapter 40: And YHWH speaks to Moshe, and tells him to raise up the Dwelling Place, put all the items inside and set-up the court yard. It was Moshe’s duty to anoint all the items and set them apart. He also needed to bring Aharon and his sons to the door of the Tent of Meeting, wash them with water, clothe them with the special garments, and anoint them to serve as kohanim (priests) to YHWH. And their anointing was to be for an everlasting kahuna (priesthood) throughout their generations. 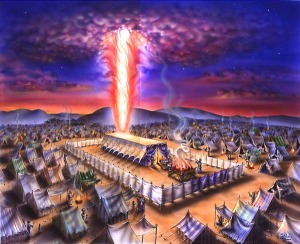 This wraps it up for Shemoth! That’s means we’ve gone through the first two books of the Torah already! Great job!

Don’t forget to join us next time as we go to the 3rd book, Wayyiqra (Leviticus)!