The Torah Portion this week is called Balaq (Balak, בלק), named after a king of Moab. This king seeks out a sorcerer to curse the children of Yashra’el and things don’t end up going his way.

Chapter 22 (continued):  This torah portion is named after Balaq (Balak), a Moabite king. Last week we ended with the children of Yashra’el camping out in the desert plains of Mo’ab, and now the king of the Moabites knows they are near and is terrified! Balaq, the king has heard of how the Yashra’elites have conquered the people in their path and is now seeking some way that he can get rid if them. So king Balaq meets with leaders of Midyan and reminds them of how the Yashra’elites are like ox, licking up everything around them like grass! He comes up with a clever plan to have a man named Bil’am come and curse them, as they know that everyone he curses is cursed, and everyone he blesses (barak) is blessed.

And so elders (leaders) of Mo’ab and leaders form Midyan leave to see Bil’am with the money needed for Bil’am’s services. They explain to Bil’am what they want him to do and he asks that they spend the night while he speaks to YHWH about it. YHWH speaks to Bil’am and warns him not to go with the leaders and not to curse the people of Yashra’el, as they are blessed (baruk). In the morning, Bil’am tells the leaders no and tells them that YHWH will not allow him to go. When king Balaq find out, he’s desperate and sends for him again, sending more people and leaders who were more esteemed than the ones before. The people urge Bil’am to come, but he tells them that even if king Balaq were to give him the king’s house filled with silver and gold, he still wouldn’t be able to go if YHWH doesn’t allow him to. The people stay with him again for the night, while Bil’am seeks YHWH to find out what he should do. Then YHWH told him that if the men come to call him, then he should go with them, speaking only what YHWH tells him to.

Fun Fact: So who is Bil’am, anyway? Well Bil’am is like a very well-known sorcerer at this time, and is seen for divination that he charges for. The most interesting thing of all is that he can’t do anything that YHWH doesn’t ALLOW him to. This goes to show who’s really in charge of everything.

However, in the morning Bil’am saddles his donkey and leaves with the people anyway. YHWH was angry about this, and as Bil’am is on his way with his two servants, a messenger with his sword drawn stands in Bil’am’s way. Surprisingly, the donkey is the only one that sees the messenger blocking their path! The donkey turns away toward a field and Bil’am beats his donkey to turn it back to the correct path. The messenger again stands in the way in a narrow passage between vineyards and the donkey pushes herself against the wall and Bil’am’s foot get hurt in the process. He beats her again and they go on. But then, the messenger stands in a place where there is no way to turn aside, and when the donkey sees this, she lays down and now Bil’am is really, really mad! He beats the donkey with his staff, and then YHWH opens the donkey’s mouth and the donkey speaks to him! She says, “What have I done to you, that you have beaten me these three times?” 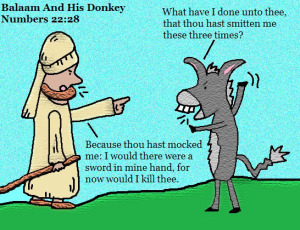 Bil’am replies to the talking donkey, “Because you have mocked me. I wish there were a sword in my hand, for I would have killed you by now!” YHWH opens Bil’am’s eyes and then he sees the messenger too, standing in the way with his sword drawn! Bil’am bows down and the messenger tells him that if his donkey didn’t turn aside from him, he would have already stuck Bil’am and let his donkey live. Bil’am realizes his sin, and the messenger allows him to go with the men now, but he can only say what YHWH tells him. Balaq the king meets Bil’am and Bil’am reminds him that he can only say what YHWH tells him.

Chapter 23: The king takes Bil’am to high grounds where he can see the Yashra’elites down below. They offer offerings and Bil’am goes on to hear from YHWH. YHWH puts a word in Bil’am’s mouth and tells him to return to Balaq. He goes back to king Balaq and the leaders of Moab and gives a blessing for Yashra’el as YHWH gave him. The king is frustrated, because he blessed the people he wanted cursed! Balaq tells him he will take him to a higher place to curse them for him, because he can only see a small amount of the people, and not all of them.

King Balaq takes him to another place higher up, called Pisgah. They offer offerings and Bil’am goes further to hear from YHWH while everyone else waits. YHWH puts another word in Bil’am’s mouth and Bil’am returns again with another blessing, and tells the king there can be no sorcery or divination against Yashra’el. Balaq tells him not to bless or curse them at all, since this is not working in his favor! Bil’am reminds him that he can only say what YHWH tells him, and the king takes him to one more place, to see if it might be right in the eyes of YHWH to curse them from there. They go on to the top of Pe’or and offer offerings there, doing the same as before.

Chapter 24: When Bil’am sees that it pleases YHWH to bless Yashra’el, Bil’am doesn’t seek to use sorcery like the times before, but sets his face towards the wilderness and YHWH gives him another word. He blesses the people again, and now king Balaq is very angry with him and tells Bil’am to go flee back to his land! Bil’am reminds the king again, that he can only say what YHWH tells him, even if the king offers him his house filled with riches. He tells the king he’s going back home, but advises him as to what will happen to his people in the latter days.

Fun Fact: Bil’am pretty much tells the king and the leaders that they’re all going to conquered. Edom and Se’ir will become possesions, the nation of Amaleq will perish forever, Qayin will be burned, and more.

Chapter 25: Next we go back to the children of Yashra’el. Sometime later as they are dwelling in Shittim (nearby), the people begin to mix themselves with the daughters of Mo’ab, going to the slaughterings of their mighty ones, feasting with them and bowing down to their mighty ones! YHWH’s anger burns against Yashra’el! YHWH tells Moshe they must get rid of all the leaders immediately, and Moshe tells the judges of the people they must kill the men responsible! And as this is going on, a man brings to his brothers a Midyanite woman in front of Moshe and everyone weeping at the Mishkan (Dwelling Place)! When Pinehas (grandson of Aharon) sees it, he spears the man and woman together, to end the plague that YHWH had poured on the people for their sin. The plague stopped and those that passed away before hand were 24,000.