This Torah Portion is entitled Tzaw (Tzav) meaning command.  In this section of Torah many additional aspects of the sacrificial offerings are addressed. In the previous Torah Portion we found many of the requirements involved for the one bringing an offering. However, in this study we gain understanding of the actual performance of these offerings as they are carried out by the Kohanim (Priests).

The ascending offering is a freewill (nedabah) slaughter offering. This offering was to be entirely burned with fire upon the altar of sacrifice. Like all offerings unto YaHuWaH the animal must be perfect without any type of defects. When the animal is sacrificed the blood is to be caught in a pan and the Kohen (priest) sprinkles the blood (zerikat hadam) on the altar If the animal is an oxen, sheep or goat semichah, which is the laying on of hands, and viduy, which is confession, is to be done.  After this the animal is to be butchered into pieces, salted and burned completely. We learn in this section of Torah that the offerings must be done during the daylight hours and that they are to burn through the night.  The hours of prayer that the prophets observed, such as Daniel in the Babylonian exile were done at the 3rd, 6th and 9th hours line up with the time of the offerings. The Kohanim (Priests) were to tend to the altar to ensure that the flame of the altar was an everlasting flame, never to be extinguished.

The Kohen’s duty is to keep the fires of the Altar constantly burning, and to remove the ashes each morning which is an act called terumat hadeshen, the first activity of the daily service in the Sanctuary. 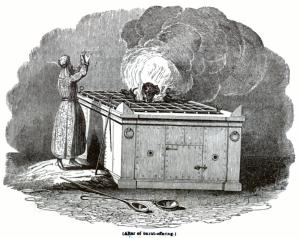 The meal offering was a freewill offering (nedabah), with the exception of the firstfruits. This offering is of fine flour, offered with olive oil and frankincense. Those who cannot afford to bring an animal normally give this offering. A portion of this offering is to be salted and burned on the altar. After YaHuWaH receives his portion, the Kohanim (Priests) eat the remaining portion. This flour offering must be done quick enough that the dough will not rise.   Additionally we learn that the Kohan HaGadol (High Priest) is responsible for this offering. In fact the Kohan HaGadol was to offer a mincha offering on his first day in service. Following this he was responsible for this offering daily before YaHuWaH, half of the offering was performed in the morning while the remaining half was offered in the afternoon. These offerings, and any other type of meal offering brought by a Kohen (Priest), are burned entirely on the Mizbeach (altar). If meal offerings are brought by those outside the Kahunah (“Priesthood”), they are for food to be consumed by the Kohanim, after a “handful” has been removed for burning on the Altar. 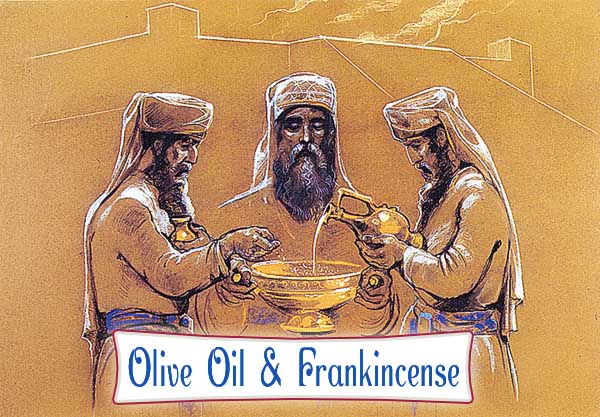 Wayyiqra (Leviticus)6:14‘And this is the Torah of the grain offering: The sons of Aharon shall bring it near before YaHuWaH, in front of the altar,15and shall take from it with his hand from the fine flour of the grain offering, and from its oil, and all the frankincense which is on the grain offering, and shall burn it on the altar for a sweet fragrance, as its remembrance portion to YaHuWaH.16 ‘Then Aharon and his sons eat the rest of it. It is eaten with unleavened bread, in the set-apart place. They eat it in the court-yard of the Tent of Meeting.17‘It is not baked with leaven. I havegiven it to them as their portion of My offerings made by fire, it is most set-apart, like the sin offering and the guilt offering.18‘All the males among the children of Aharon eat it – a law forever in your generations concerning the offerings made by fire to YaHuWaH. All that touches them is to be set-apart.’ ”19 And YaHuWaH spoke to Mushah, saying,20“This is the offering of Aharon and his sons, which they bring near to YaHuWaH, beginning on the day when he is anointed: one-tenth of an Ephah of fine flour as a daily grain offering, half of it in the morning and half of it at night.21 “It is made on a griddle with oil. Bring it in mixed, bring the baked portions of the grain offering near, a sweet fragrance to YaHuWaH.22“And the anointed priest from among his sons, who is in his place, prepares it – a law forever to YaHuWaH. All of it has to be burned,23 and every grain offering for the priest is completely burned, it is not eaten.” 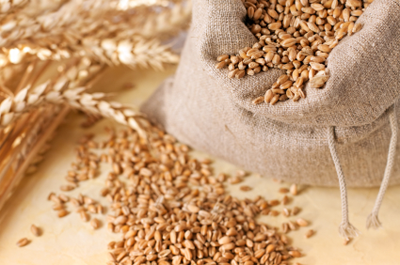 The Shalom offering is a freewill offering (nedabah). The laying on of hands (semichah) is to be performed for this offering although confession is replaced with a verbal praise offering unto YaHuWaH. The blood of the animal is to be sprinkled on the Altar. The one who brings the offering is to eat of the meat however the kohanim (priests) would eat the breast and right thigh. Further we learn that there is a variation of the Shalom offering which is called Zebach Todah meaning an offering of thanks. This was a freewill gift to thank YaHuWaH for his kindness and compassion especially after certain events in one’s life. This offering requires ten loaves prepared with chametz (leavening) and thirty “cakes” of matzah (unleavened bread). This offering must be consumed within a 24 hour daytime period. The purpose of this gift is to provide a meal of rejoicing for the friends and family of the one offering.

The “sin offering”, is not optional but is chovah, meaning required. This offering is necessary to make atonement for individuals or the entire nation when they have accidentally broken the commands of YaHuWaH. The blood is to be used in the Mishkan (dwelling place) while the flesh and hide were burned outside the camp. The sin offering and the guilt offering are to be eaten by the Kohen after the chalabim (veins of fat) are removed and burned on the Altar. It is rigorously prohibited to leave over any part of the korban past the prescribed time. The sin offering must be consumed witin one day and one night. Even the deposit absorbed by the pot in which the meat was cooked is forbidden to use.

Wayyiqra (Leviticus) 7:25 “Speak to Aharon and to his sons, say- ing, ‘This is the Torah of the sin offering: In the place where the burnt offering is slaughtered, the sin offering is slaughtered before YaHuWaH, it is most set-apart.26‘The priest who is making atonement eats it, in the set-apart place it is eaten, in the courtyard of the Tent of Meeting.27‘All that touches its flesh is to be set- apart. And when its blood is sprinkled on any garment, you wash that on which it was sprinkled, in a set-apart place.28‘But the earthen vessel in which it is cooked is to be broken. And if it is cooked in a bronze pot, then it is scoured and rinsed in water.29 ‘Every male among the priests eats it, it is most set-apart.30 ‘And no sin offering from which any of the blood is brought into the Tent of Meeting, to make atonement in the setapart place, is eaten, it is burned with fire. 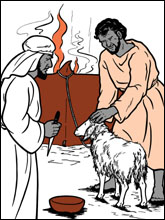 An asham is notable from the standard sin offering in that it requires a ram (male sheep), and the animals worth had to be at least “two shekels of silver of the shekel of the Sanctuary.”The Asham as described in the previous Torah Portion can be divided into three categories. The first type of trespass requiring a guilt offering is brought by one who inadvertently made use of property belonging to the Sanctuary, This crime is considered to be betrayal. Not only will sacrifice be required be he must pay back what he had appropriated and add to that an one fifth of its value.A second category of “guilt offering” is asham talu, This offering is brought by one who thinks he may have unintentionally transgressed, but is not sure The third asham of our Torah Portion is required when a man/woman has sworn falsely to deceive his neighbor.Just as the blood of the sin offering is used in the Mishkan and the flesh and hide is burned outside the camp, the same is so for the guilt offering We also learn further that the burnt offering, sin offering and guilt offering are all done at the north of the altar. It is assumed that this is done so that the one bringing the offerings can have privacy from his friends, that they may not know if he is offering for sin, guilt or to perform a whole burnt offering. Though each offering is individually different the principals behind them are very much similar. 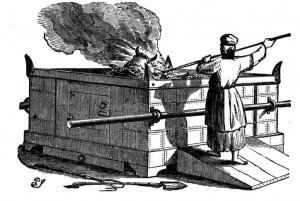 All portions of the korbanot (sacrifices) that were to be consumed had to be eaten “in qodeshah”. The word qodesh and qodeshah in Hebrew literally mean set apart and has often been translated “holiness” (however holiness has a pagan connotation).   This means the korbanot must be eaten within the prescribed time, prescribed place, and the person eating them had to be in a state of purity (taharah), as defined by Torah.

After many of the details of the offerings are given the Torah explains how Mosheh (Mushah) initiated Aharon and his sons into the Kahunah (priesthood) during the “Seven days of Inauguration” instructed in the Parshah of Tetzaweh.  Mushah erected the Sanctuary, then he anointed it with the Anointing Oil, dressed Aharon and his sons in the priestly garments, and anointed them. On each of the seven days Aharon and his sons brought a series of offerings, while Mushah oversaw as the Kohen (priest) and offered them on the Altar. These offerings consisted of a bullock brought as a chatat (sin offering), and two rams ;one as an olah (burnt offering) and the other as a special offering called the”ram of inauguration.” The blood of this “ram of inauguration” was to be applied the right ear, right thumb and right big toe of Aharon and his sons! 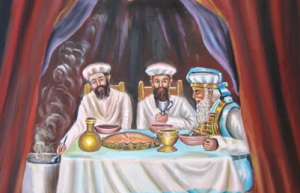 We are called to be a Malchut (kingdom) of Kohanim (priests). In this regard we are to be anointed as well but not with the qodesh oil but rather the Ruwach Ha’Qodesh (set apart wind/breath/spirit) of YaHuWaH! We are to be also anointed by the blood of the ram so to speak. We know this is a type and shadow of Mashyach (Messiah). The very word Messiah, which comes from the Hebrew Mashyach, means Anointed. Every Melek (King) and Kohen (Priest) must be anointed and we know that “the Messiah” will be both a King and a Priest forever after the order of Malki Tsadiq (Melchesedek). While Aharon and sons were literally set apart by the blood of the ram, we are to be made set apart by the blood of the sufferings of Messiah Yahuwshuwa! Every piece of furniture in the Mishkan, including the Mishkan itself was anointed (mishcha) with oil. Therefore we may find that every element of the Mishkan (dwelling place) is a picture of Mashyach (The Anointed One). Yahuwshuwa is the true Mashyach, expressed in every “jot” and “tittle” of the Torah!