Hebrew Word/Phrase of the Week: Vayeira

Meaning: ‘and HE appeared’

This week’s Torah Portion is called Vayeira (וירא) and it means “and HE appeared.” The first verse says, “And YHWH appeared (Vayeira) to him by the oaks of Mamre, while he was sitting in the tent door in the heat of the day.” 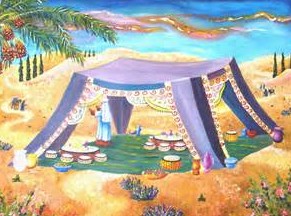 Chapter 18: It was a very hot day, and Abraham was sitting at the door of his tent when he saw 3 men standing in the distance. Abraham ran to meet them and had delicious foods quickly prepared just for them. One of the messengers then announces that in one year Sarah would have a son. Sarah listening, hears this and laughs to herself!

Fun Fact: Sarah is 89 years old when this happens!

Two of the messengers leave after Abraham walks them on their way. They are given a mission from YHWH and they have to destroy the city of Sodom for all its evil. Abraham speaks to YHWH and asks him to save the city. YHWH tells Abraham that if there are only 10 righteous people in the city, he will not destroy it for their sake. Then YHWH leaves and Abraham goes back home.

ssengers arrive at the gate of Sodom. Lot (Abraham’s nephew) sees them. He asks them to come and rest at his home. The messengers go and eat after Lot urges them to come. Soon, many people surround Lot’s home and cause so much trouble, that the messengers of YHWH blind them so they cannot find Lot’s door anymore. The messengers then tell them to run for their lives and don’t look back! They are going to destroy the city! When they were out of the city, YHWH begins to rain sulphur and fire from the shamayims (heavens). Lot’s wife looks back and turns into a pillar of salt, and Sodom and Amorah is destroyed.

Chapter 20: Abraham and Sarah move to Gerar. Again, a very important ruler notices how beautiful Sarah is, just like in our last lesson! They tell anyone who asks that they are brother and sister again. This time, it is the King of Gerar, Abimelek who wants Sarah and she is taken away. YHWH reveals himself to Abimelek in a dream and warns him to free Sarah or he will die. YHWH had plagued Abimelek and his household because of Sarah, so when Abimelek lets her go free, Abraham prays for Abimelek so the plague would go away and it does.

Chapter 21: As YHWH promised Abraham and Sarah in the last lesson, Sarah becomes pregnant and has a child named Yitshaq (Issac). When Yitshaq is weaned they have a very big party. Yishma’el, Abraham’s older son from his servent Hagar, makes fun of Yitshaq and then Hagar and Yishma’el are sent away. YHWH still takes care of them in the wilderness.

Chapter 22: And it came to be, that after all these events YHWH gave Abraham a test. He commands Abraham to sacrifice Yitshaq as an offering! Abraham, being very obedient, does just as YHWH says and brings his son Yitshaq to a place called Moriyah. Just before Yitshaq is sacrificed, YHWH stops them! This was afterall, only a test to see how much Abraham really loved YHWH and would do as he says. At that point, YHWH provides the real offering, a ram with it horns caught in a bush, and Abraham sacrifices the ram.

Fun HISTORY Fact: Mount Moriyah is where the Set-Apart Temples were later built.