Hebrew Word/Phrase of the Week: Toldot

This week’s Torah Portion is called Toldot (תולדות), and it means “ Family History.” Toldot tells a lot about Yitshaq’s family life, as well as Ya’acob’s deception in order to receive the family blessing

Chapter 25 (cont.): Continuing from our last lesson, Yitshaq married Ribqah and is comforted after his mom passes away. Yitshaq prays to YHWH for Ribqah because she can’t have any children. YHWH answers Yitshaq’s prayer and Ribqah becomes pregnant. During her pregnancy, she has trouble and doesn’t know why. The time comes that the baby is ready to be born, and surprise! Ribqah has twins! Esaw is born first and he is ruddy.

Fun Fact: That is why his name was called Edom (Esaw).  It means red!

Ya’aqob comes following his brother and holding on to Esaw’s heel when he is born. One day when the boys have grown, Esaw comes back from hunting, all worn out. His brother Ya’aqob had been cooking, and Esaw asks for some of his brother’s lentil stew. Ya’aqob tells him that if he will sell him his birthright, Ya’aqob would share his food. Esaw feeling very weary, agrees and Ya’aqob gives him bread and lentil stew. Esaw eats and leaves, despising his birthright.

Fun Fact: In the scriptures, it has always been customary that the oldest son inherit their parents home and belongings, and that the others would serve the oldest! Esaw being so tired and hungry, gives his birthright away to Ya’aqob, his younger brother!

Chapter 26: Eventually, there comes another famine in the land. Yitshaq visits Abimelek, the sovereign of Gerar and then YHWH tells him not to go down to Mistrayim (Egypt) but to live in the land that YHWH shows him. Yitshaq dwells in Gerar, and soon after the men of this place ask about his wife, Ribqah! Yitshaq tells them that she is his sister because he fears that the men of this place will kill him, since she is beautiful!

Fun Fact: Something sound familar here? Abimelek is the same sovereign that wanted Sarah as his wife before (in lesson 1.4- Vayeria)! Yitshaq even tells the men the same thing Abraham told Abimelek long ago. But in this case, it’s Ribqah they want.

Abimelek finds out that Ribqah really is Yitshaq’s wife, and Abimelek orders the men not to mess with them anymore. As time goes on, Yitshaq has a lot of belongings and many animals. So much, that the Philistines become jealous of him! They ruin all the wells of water his dad’s (Abraham’s) servants had dug long ago, by filling them with dirt. Abimelek then asks Yitshaq to leave and he moves his tent to the wadi Gerar.
Yitshaq digs his father’s wells again, but when they dig another well near their new home and find water, the herdsmen of Gerar argue over the well, saying the water is theirs. So Yitshaq digs another well and they argue over that one too! Finally, Yitshaq moves his tent again. This time, they dig ANOTHER well and no one argues over that one.

Fun Fact: Did you know? About 90 percent of our freshwater comes from underground!

From there, he goes on to Be’ersheba and builds an alter there. He calls on the name of YHWH, moves his tent and digs a well there too. Later Abimelek visits Yitshaq and makes a deal with him, that they will both not do anything bad to each other. They agree and Abimelek leaves in shalom (peace). Time goes on and Esaw is now 40. He takes two foreign wives and the women make his parents lives very bitter (Remember, the women in this land were not YHWH’s people!). 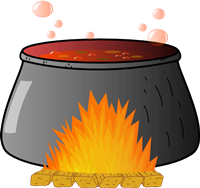 grows old in age and cannot see anymore. He asks Esaw to hunt game (wild meat) and make him a tasty dish like he loves, so he can barak (bless) him before he passes away. Ribqah hears what Yitshaq said and speaks to Ya’acob while Esaw is away. She tells him to do as she says so he can receive the berikah (blessing) before his father passes. She tells him to get two goats and Ribqah makes a tasty dish just like Esaw’s type of cooking. Before she sends him to his father, Ribqah puts patches of goat hair on Ya’acob, so he can hairy like his brother, just in case Yitshaq touches him. Ya’acob does as his mother tells him and brings the delicious dish to his father. Yitshaq notices Ya’acob doesn’t sound like Esaw, but after testing him a few times, believes he is Esaw. He eats all of the food Ribqah prepared and barak (blesses) Ya’acob with Esaw’s berikah (blessing). Soon after, Esaw returns with the tasty dish for his dad…

Yitshaq confused, asks who he is and trembles terribly when he realizes he’s been tricked! Esaw cries to his father but it’s too late. Esaw, is furious with Ya’acob and plans to kill him when his father passes away. Ribqah finds out and tells Ya’acob to go to her brother Laban’s house for a few days, until Esaw calms down. Ribqah also tells Ya’acob that she is disgusted with her life because of Esaw’s wives, and warns him not to marry a woman like the women his brother married!

Chapter 28: So before Ya’acob leaves, his father also tells him not to marry a woman from Kena’an, but to go to Ribqah’s brother Laban’s house and marry one of his daughters. Ya’acob listens and does what he is told. Esaw, hearing the command that Ya’acob was not to marry a woman from Kena’an, then marries a daughter of Yishmael his uncle because of this. (To be continued next week!)