Meaning: (Name of a Lewite)

The Torah Portion this week is called Korah, (korach, קורח), (Qorah) the name of a Lewite we get to read about this time. The people are given into jealousy and make some bad decisions. YHWH punishes the people involved and Aharon and his sons are officially chosen (Again) as YHWH’s High Priests.

Chapter 16:  This week, we begin with one of those action packed chapters you don’t want to miss! It all starts with a man named Qorah, hence the name of this Torah Portion. He’s a great-grandson of Lewi, and along with two men named Dathan and Abiram of the tribe of Re’uben, and 250 of their well-known leaders they all assemble against Moshe and Aharon! They say, “Enough of you!” Jealous of Moshe and Aharon and their positions as leaders, they say, “all the congregation is set-apart, all of them, and YHWH is in their midst. Why then do you lift up yourselves above the assembly of YHWH?” Moshe listens to their petition but has to question why the Lewites involved (Qorah being the main guy) are not satisfied enough with being the chosen by YHWH to keep the Dwelling Place, but are now coveting the Priesthood also? And so later, Moshe calls for them and they grumble against him, saying, ““Is it little that you have brought us up out of a land flowing with milk and honey, to kill us in the wilderness, that you would also seize total rule over us? Also, you have not brought us into a land flowing with milk and honey”. In short, they disrespect Moshe by telling him they weren’t coming after he called for them.

Moshe is angry with them but requests the people involved to all bring a fire holder with incense in it to the Mishkan (also called the Dwelling Place, or Tent of Meeting) as a offering tomorrow and let YHWH chooses who he pleases. So Qorah assembles all the congregation against them at the door of the Mishkan. The esteem of YHWH appears to everyone and YHWH (mad because of all this) speaks to Moshe and Aharon, telling them to get away from the midst of the people, so he can consume them in a moment!

Moshe and Aharon beg YHWH to not punish all the people for one man’s sins, and YHWH warns Moshe to tell the congregation to move away from the tents of Qorah, Dathan and Abiram, the main guys guilty of all the trouble. Moshe then tells the congregation that if YHWH creates “what is unheard of, and the earth opens its mouth and swallows them up with all that belongs to them…”, then “you shall know that these men have scorned YHWH.” 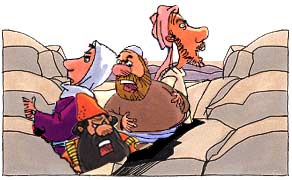 And before he finishes speaking, the ground under those guys split apart, the earth opens its mouth and swallows them up, with their households and with all their goods. The people around flee worried that the earth could swallow them up the same! And then a fire comes out from YHWH’s esteem and consumes the 250 men that brought the fire holders to YHWH’s Mishkan. Afterwards the fire holders were made into set-apart beaten plates for a covering for the alter, because those people did bring it as a offering and also to be a remembrance. Let no stranger who is not of the seed of Aharon, come near to offer incense before YHWH.

The next day, the grumble again against Moshe and Aharon, blaming them for killing the people of YHWH! And when the people assembled against them, the esteem of YHWH appeared as a cloud above the Mishkan and spoke to Moshe telling them to leave the midst of the people because he was going to consume then in a moment’s time! Moshe warns Aharon that the plague is beginning! He tells him to hurry and take the fireholder and put fire and incense on it as an offering! Aharon rushes and runs to the congregation to make atonement for their sin and behold! When he gets there he sees that the plague has already started and he was standing between the living and those that had already passed away.

Fun Fact: The plague stops there, but those that passed away beforehand were 14,700, not including the people who passed away on account of Qorah- the 250 leaders plus Qorah, Dathan and Abiram, and their families that were with them at their tents.

Chapter 17: Even after all of this, YHWH still allows the people to publicly see who he chooses. He tells Moshe to allow the people to take 12 rods, one for each tribe with their leader’s name on it, and bring it to the Mishkan, so that the rod of the man he chooses will bud, and then he can rid himself of the grumblings of the children of Yashra’el that they bring against Moshe. So the leaders give him their rods, Aharon’s rod included since he would be the leader of the Lewite Tribe, and Moshe places the rods before YHWH in the Mishkan.

The next day, Moshe visits the Mishkan, and sees that Aharon’s rod has budded. And not only did it bring forth buds, but it blossomed and even bore ripe almonds! Moshe brings the rods out to show the people and gives the other leaders their rods back. But YHWH tells Moshe to bring Aharon’s rod back to be kept as a sign against the rebels, and to put an ending “to their grumblings, less they die”. The people, worried that they are all going to perish, tell Moshe that anyone who comes near the Mishkan passes away, and worry what they are to do.

Chapter 18: So YHWH speaks to Aharon and tells him that he and his son’s have been given the priesthood. It’s a gift from YHWH and YHWH continues to tell Aharon of the gifts he will pour on them, for serving him and for the service of the Mishkan. For starters, his brothers the Lewites are given to Aharon and his sons as a gift also, to help them and take care of many of the labors/maintenance for the Mishkan, such as assembling and re-assembling the Mishkan when they move camp. Having all this help should take care of the people not needing to come near YHWH’s Mishkan, as they worried that if they came near, they would bear their sins and pass away. He also tells him of their portions they will receive from the people’s most set-apart gifts, their offerings.

Fun Fact: From the offerings made by fire, they would receive all their offerings. All their grain, sin and guilt offerings. Also all the wave offerings, the best of the oil, the wine, the first-fruits, even every man and beast that was a first-born and brought to YHWH would be theirs.

But because YHWH was giving the Lewites all these set-apart gifts, they would not receive any land in the Promised Land, because YHWH would be their portion. The tithes that the children of Yashra’el bring would be theirs, they only had to bring 1/10th of the tithe as a contribution to YHWH and the rest was theirs (the tithe being grain and wine) as a reward for their service to the Mishkan.